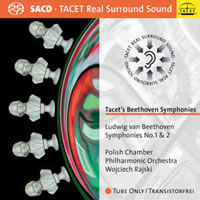 This instalment in Tacet's Beethoven cycle is almost as enjoyable as their previous release: Beethoven: Symphonies 7 & 8 - Rajski

Using small forces, the early Beethoven symphonies are presented with a youthful enthusiasm rather than a revolutionary zeal as evinced by Haitink in his LSO Live cycle. This is perhaps largely due to the chamber sized orchestra rather than the full force of the LSO (even in the early symphonies). Such an approach pays dividends here by showing the link with Mozart and Haydn that Beethoven was at the same time imitating yet attempting to usurp in terms of musical language.

Allegro's are fleet, slow movements move with flowing grace and the first symphony's Menuetto is (to someone with two left feet) impossibly fast for the titular purpose! The Scherzo is not comical in the way that Haydn would have recognised but there are some serious "jokes" which are given the full effect because of the divided violins (see below). The dynamics are all there but not given a Romantic heft in the way that other accounts can apply - many would think this appropriate given the revolution of the Eroica has yet to be penned but there may be a few who feel a little short-changed.

In general, the Polish Chamber Philharmonic Orchestra (Sopot) are well drilled under Wojciech Rajski but there are a couple of notorious passages in the Second symphony where the violins in particular are not allowed to stand the close scrutiny that is afforded to other orchestral sections or passages; it is hard to tell if this is the engineers decision, Rajski's decision, the sections decisions or a combination of all three. The oboes in the second movement of the Second symphony sound as though they are tuned to a very slightly different A than the rest of the orchestra - was a different take used? Not sure, but another one should have been! These moments are few in number but I worry that they would jar increasingly upon repeated listening and those looking for a fleet-of-foot and very enjoyable First symphony need not worry.

This places the listener in the thick of the action and it is quite thrilling. So many details that normally have to be sought out by referring to the score, leap off the page and into the minds eyes. Sometimes the whirl of the finales is almost motion-sickness inducing! Greatly enjoyable and a genuinely stimulating approach that all who are interested in Beethoven should try and hear.

As before, a careful set-up of ones equipment is needed or the marvellous effects are quickly lost and submerged into a mire of echoes.

Recommended for the first symphony without hesitation; the second symphony carries a minor health warning but is largely enjoyable and I will be returning to this for inspiration (but it will not displace Haitink or similar accounts from my affections). 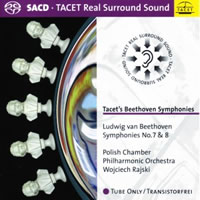 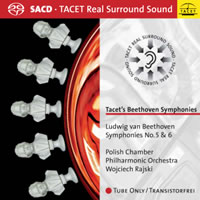 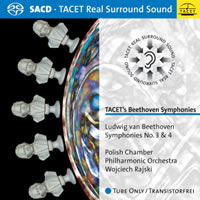 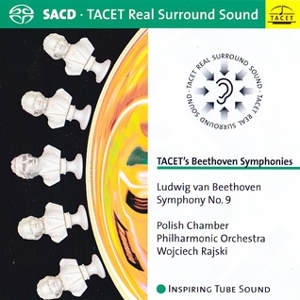 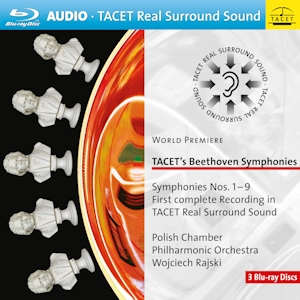 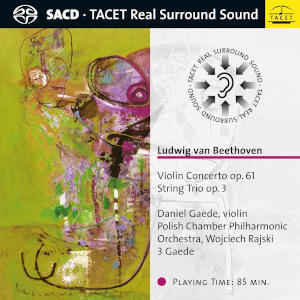