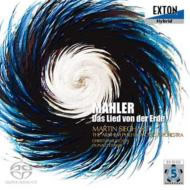 Mahler considered Das Lied von der Erde "the most personal thing I have ever created". Yet there are remarkably few truly great recordings of this work. Many conductors of Mahler's symphony cycles have become shipwrecked on this final piece, others have simply avoided it.

The moment I heard this new version by Sieghart, Stoijin and Litaker with the Arnheim Philharmonic Orchestra, I was captivated, and decided to make detailed comparisons with SACDs by Boulez and Lan Shui to find out why. I do not usually pay undue attention to movement timings, as they are bound to vary from performance to performance, and in any case, what does a few seconds difference matter? Here is my table:

Sieghart is on balance the fastest of the three, particularly in the Abschied, with Lan Shui being the slowest, again mostly in the Abschied. Incidentally, these timings reveal an important point about the structure of the work: Mahler's symphonic plan groups the first 5 vignettes as part 1, with the Abschied as part two, so that the two parts should be almost balanced in timing. Bruno Walter, the work's first interpreter, demonstrated this in his own recordings. Sieghart's tempi are always flowing, with an eye on the overall structure, and certainly in the Abschied there is never any feeling of haste. With Boulez, there is a plodding heaviness, compounded by the congested recording and less than fully involved playing from the VPO. And Lan Shui's lingering tendency fragments the long phrase structures, like a jig-saw puzzle pulled somewhat apart. For me, it is Sieghart who truly shows the symphonic nature of Das Lied, and he evokes recognition of countless internal references in the five movements which bind it together. He also makes apparent references to other Mahler works, such as the Wayfarer Songs, Rückert Lieder, Resurrection Symphony and even the adagio of the Fifth Symphony (in the Abschied).

As well as superb control over his excellent orchestra, Seighart very meticulously executes Mahler's almost obsessional performing instructions in this wonderful score. Emphasis, dynamics and minute tempo adjustments are all faithfully observed, making the score sound new-minted, with the orchestra following enthusiastically. There are no spectacular climaxes in this piece, and very little which is marked fortissimo; most of it is piano or pianissimo, and here the singers are also willing collaborators. The strings of the orchestra themselves may not have the luxuriant saturated tone of the Concertgebouw or VPO, but that is actually an advantage in this work with its characteristic lean and airy textures. In any case, the strings are sweet and very expressive, and violins are divided left and right, so revealing much more of their counterpoint. Contrast this with Boulez's recording, which is oddly off centre to the left, with little sound coming from the right speaker for long periods.

The singers are by far the finest on the new SACD recordings. It is important to realise that Mahler does not present them as separate characters, but rather as the male and female viewpoints of a single spirit. The tenor part is fiendishly difficult, and I normally am ready to be made uncomfortable in the first movement's perverted drinking song, in which many tenors have to shout or bellow. The American tenor Donald Litaker really shows how this movement should be done, with heroic, buoyant, superbly focussed and controlled tone, able to keep his throat open even when hitting his golden high B flats. His experience in Rheingold, Salome and Mozart clearly shows. He sings this not quite right Viennese waltz with drunken ardour, bitterness, insolence and great irony, fully supported by the orchestral brass and woodwind - the flutter-tonguing flutes are particulary sneering; this was a brand new technique at the time Mahler was writing Das Lied. In Von der Jugend, Litaker transforms into the naive country lad of the Wayfarer Songs, bright-eyed, eager, fresh and joyful with humourously pointed rhythms and yearning after the young maidens. Convincingly drunk again in Der Trunkene im Frühling, he satirizes binge-drinking with cheery and cheeky denial of reality, including some spontaneous comic effects. Always his diction is exceptional, as is his word-painting.

Christianne Stotijn is evidently now one of the best Mahler contraltos around. Having not heard her before, the tonal quality and inwardness of Janet Baker and the intelligence of Brigitte Fassbaender came to mind. It was not until later that I learned that while training she had attended Janet Baker's master-classes. She is simply superb in Das Lied, varying her depth of vibrato and tone colour, bending them to the text and capable of wonderfully controlled breathing in her long soft lines. In Abchied, she is heart-breaking in her portrayal of the Departure of the Friend, following Mahler's directions about voice production to the letter (for example "schwer" - heavy or laden, or "without expression"). With Seighart keeping this slow finale moving inexorably along, she and the orchestra interact with such mutual understanding that the final chord truly sounds as if it "is printed on the atmosphere" in Benjamin Britten's description.

The 5.0 DSD Exton recording, made in December 2006 at the Concert Hall, Musis Sacrum in Arnhem, is the best I have encountered so far from this company. (Incidentally, websites of several record dealers suggest that it was made by the company after a highly praised performance at the BBC Proms in 2007 by the full team - clearly not true!). The engineers have produced a natural sound picture of the orchestra with air around it but no excessive reverberation, packed with transparent detail, so that one can clearly hear the bass clarinets and contra-bassons which figure so much in this work, as well as the tam-tam and even the mandolin which appears in the Abschied. Although the recording is quite immediate, all the orchestra sections are represented in their natural positions, not as point sources as in Exton's other over-miked productions. The singers are not unnaturally close (as is Boulez's tenor, where one flinches as his harsh tone appears to come from ones own seat!)and are clearly in the same acoustic as the orchestra. In short, the engineers have achieved a recording which fully supports and represents the artists' achievements in this work. Perhaps I should mention that there are a couple of quite audible thuds from the conductor's rostrum; no doubt Maestro Sieghart was lunging to indicate a climax, and these simply reinforced my feeling of having the best seat in the stalls.

My disc was the European edition, which has a different cover photo than that pictured above. The notes are in English and German with the texts only in German.

Mahlerians will want to hear this disc. I found it deeply moving and completely absorbing. It made me re-appraise the work as a whole, and enabled me to cast off previous disappointments. I would love to hear this whole team record some of the Mahler orchestral song cycles, especially the Rückert Lieder. How about it, Exton?

Like Geohominid before me, even on first hearing, this struck me as a special account of a work that is frequently let down by singers, orchestra, conductor or recording team.

My first encounter with the work was with Karajan, who I admire a great deal in Mahler, yet despite tempi that are almost uniformly 10% faster than the great Austrian maestro, at no point did the intensity (or stillness in the Der Abschied) seem lacking; in many ways it is greater. This is largely because Sieghart rightly draws the first 5 movements together to form a counterbalance to the huge, slow finale. There is a sense that Seighart captures the essence of every detail whilst keeping all these flecks of colour firmly in an overall conception of the bigger picture.

Sieghart is also wonderful at drawing out a performance of quiet precision from his orchestra that does not merely reflect the myriad of instructions but also makes sense of them in a way that is not modernist nor uber-Romantic; neither is his approach timid or boring - "just" very carefully thought out. It is a sign of the care that Sieghart imbues to the score that instrumental lines are handed over and blended with a level of care of which Karajan would have likely approved. This is not to say that it is a mush of sound - far from it - rather that this is playing of a very naturally cultured style, not normally associated with orchestras outside of the "big 3" in this repertoire.

The singers too are very good, never drawing attention to themselves but rather involving you in the musical argument. Too often, many are taxed (either the tenor in the opening Trinklied or the alto in the concluding Abscheid) but not here; everything is just as intimated in the texts (if you can't speak German, then one will need to search for translations on-line; not something that should happen these days really) and fully supported by the orchestra. It is not often that a performance, or recording, allows one to realise just how clever Mahler's orchestration is in this work but this one is so good that one is tempted to discard my copy of the score!

The recording, as Geohominid rightly observes, is arguably Exton's finest to date. There is a wonderful feeling of being granted a private concert in a fabulous acoustic.

Very highly recommended - it will take a very special release to supplant this one in my affections. 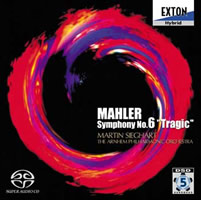 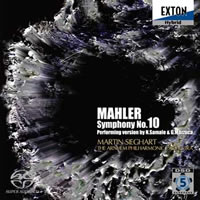 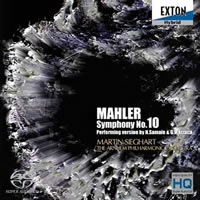 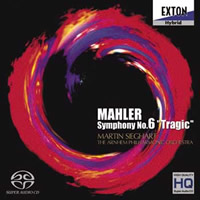