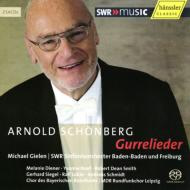 A landmark recording of this gargantuan work from the pre-Serialist Schönberg.

As with Berlioz: Grande Messe des morts - Norrington, the SWR engineers have captured vast forces with apparent ease and breathtaking clarity. [Almost disappointingly, their other most recent disc is Mahler: Symphony No. 2 - Norrington!]

The issue is an early 80th birthday present to Michael Gielen and one must say that he deserves every last second that is on these discs. Whilst this is nowhere near the fastest reading on disc, it holds the attention throughout; one must never mistake slowness for slackness. The kaleidoscope of sound is firmly but gently bought into crystalline focus under his baton. The general tempi may be slower than many on disc have adopted but the dedicated concentration keeps the listener riveted and allows for the love songs to sound genuinely tender. In the more extrovert Parts Two and Three, the slightly relaxed pacing is offset by the amount of detail that can register with the mind. Together with a rhapsodic and ecstatic closing sunrise, the emotional impact is overwhelming and takes one completely by surprise (as if Gielen is trying to conceal it from our consciousness, only to subvert this in our subconscious ear). [If one is sampling, beware - snippets here and there can be quite deceptive on first hearing.]

From the radiant opening to the terrifying hunting scenes, the orchestra is simply wonderful. It revels in the opulence of the writing whilst at the same time respecting the myriad of markings and textures to reveal this score as anew. A special credit has to be given to Gielen and the orchestra to accompanying with vigour yet not overwhelming any of the soloists. There are, understandably, one or two minor lapses but they are few and do not distract from the overall impact.

Robert Dean Smith is an established Wagnerian singer and this shows in the full and heady tone that he can find without strain. He sings intelligently and dramatically, pacing himself well throughout his contributions to the work. Melanie Diener has also sung the role of Tove for Robert Craft (now on a Naxos RBCD set) and whilst she may not possess as luxuriant tone as some nor convey all of the ecstatic moments with as much intensity as some there is no denying her understanding of the part and nothing is out of place nor is there any electricity lacking in her interpretation.

Yvonne Naef is a young singer but doesn't compare at all unfavourably against more mature artists like Anne Sofie von Otter. Indeed, there are many instances when one is grateful that Tove doesn't sound like she needs help to stay on her perch! The crucial section at the end of Part One is sung well, although not perhaps exceptionally, by Naef and she sings with a wisdom quite beyond her years. Gerhard Siegel as the Bauer is quite terrified (as would I be with the chorus and orchestra letting loose all around me!) and very convincing as the poor, confused country-dweller.

Ralf Lukas is a most entertaining Klaus-Narr; with delicious pointing, he brings out all of the black humour in his part. Andreas Schmidt as the speaker tackles the Sprechstimme with admirable taste; some have made so much of the writing that one can almost taste ham but there is no whiff of meat here! That is not to say that Schmidt is any way anonymous with his enunciation but he does not imbue it, as too many have done, with arch and frankly camp over-acting.

The combined chorus' do not have much to do as a proportion of the score but the men of these ensembles make for a most imposing army as they trample through the countryside. Their diction is a joy to behold and German speakers could easily dispense with the texts. When joined by their female counterparts in the glorious conclusion, they are just as well disciplined and expansive in tone without a hint of harshness in the sopranos.

Sensibly, to keep printing costs down, there are none of the usual biographies included in the booklet but a list of websites allows one to find more details if interested. The notes themselves are fair, with some illuminating quotes that shed light on the ideals behind the work. The song texts are given in both German and English.

For all these admirable qualities and exhilarating performances, this would amount to nothing if the 5.1 recording was not of the very highest order. Fortunately it is one of the very best one could hope to hear; it is quite a gauntlet that the SWR engineers have thrown down to other teams (both within radio and also from the recording company fraternities) and this will take a great deal just to come close to matching this achievement. The level of detail is quite staggering and takes the breath away each time one hears it, as does the wonderfully wide dynamic range reflected in the recording. Most fantastic of all is the way it sounds completely natural with a wide and deep staging (all the more tangible in the MCH presentation) which allows detail after detail to register with ease on the ear without any apparent spot-lighting. That these discs are derived from concert performances is quite unbelievable until the audible sigh-like relaxation of tension at the end of the work (the applause is not included).

Altogether a marvellous achievement from all concerned. I cannot imagine that Gurrelieder will be frequently recorded in the current climate across all media, let alone SACD but this set must count amongst those at the very top of the list - though, as with all recordings of a piece like this, none can hold all the answers. This surely has to grace every audiophiles and musicians player on many occasions - if ever there was a demonstration disc, this is it!