There is only one Roman Trilogy on SACD in the West, the Neschling on Bis (which is very good admittedly). Reiner on Living Stereo has only Fountains and Pines. Other discs ... 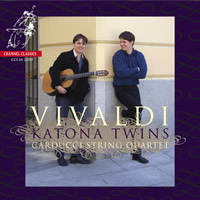 This is a feel-good disc if there ever was one. The young Hungarian Katona Twins are a guitar duo and have become something of a musical phenomenon. Their latest disc contains Vivaldi's lute and mandolin concertos arranged by them for two guitars, accompanied by the Carducci Quartet. There is nothing particularly new about this; other great guitarists including Bream, Williams and the Romeros have played such arrangements with great success. Baroque playing practices were very flexible according to available resources of both instruments and personnel, and one-to a part strings work very well, even in The Seasons. In Zoltán Katona's sleeve notes, he describes how they adapted the characteristic sound of the mandolin when playing arpeggios to the guitar, changing the usual fingering technique to achieve a similar sound. This is an indication of their care and dedication in rendering Vivaldi's music as truthfully as possible.

The concertos are interpolated by arrangements of two Trio Sonatas for lute, violin and basso continuo, giving the violin part to the second guitar. These pieces are less well-known than the concertos, and they contribute greatly to the value of this disc. Concluding the programme is a reconstruction of the Sonata in A major for two lutes by the great German lutenist, Sylvius Leopold Weiss, whose playing supposedly encouraged JS Bach to adapt some of his own music for the instrument.

The Katonas have a chameleon's ability to adapt to various musical styles with effortless authority. This is echt Vivaldi, tautly rhythmic, lyrically graceful, with authentic Baroque terraced dynamics and exquisitely turned melodies in the slow movements. The astonishing precision with which the twins swap out melodies and virtuoso passages between them makes their partnership seem as though they are one in both mind and spirit. Their playing is full of colour, with many subtle changes in registration and finger-pressure flowing naturally and inevitably between them. They give no details of the instruments they use, but often the primo part has a guitar with a sweet and brighter tone than the secondo, which is deeper and rich in harmonics. The young players of the Carducci Quartet play the ripieno parts with the same distinction of commitment and élan as their soloists.

Channel Classics have produced an exemplary DSD 5.0 recording of the proceedings in a Netherlands church. It is quite close but airy, fully capturing all the details of the musicians in glowing sound, making the string quartet seem like a small chamber orchestra. There are hardly any string whistles or fingerboard noises from the twins, making their playing seem even more supernatural.

This beautifully nuanced and lively programme of outward-looking, toe-tapping, sunny music should not be missed by Vivaldi fans and aficionados of the acoustic guitar.