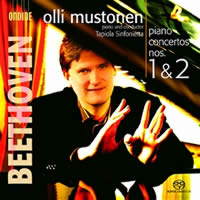 
This is the first of three volumes featuring the five Beethoven Piano Concertos and the piano version of the Violin Concerto on hybrid SACD, all performed by Olli Mustonen in the role as soloist and conductor of the Tapiola Sinfonietta.

Mustonen is known for delivering a fresh, visionary reading of popular standard repertoire music, such as Beethoven's concertos which he has never recorded before. The chamber orchestra Tapiola Sinfonietta and Olli Mustonen have maintained a close relationship for years, accompanying this ambitious recording project with acclaimed tour performances. Mustonen, who is also a published composer, is playing his own cadenzas in the First Concerto.

There are several SACD versions of the Beethoven early concertos, of variable quality, but apart from the Michael Roll series with the RPO from low resolution tapes 'enhanced' for multichannel, there is no really desirable full set making the most of present recording techniques. That is about to change. Ondine are to release a three disc series of all the piano concertos, including the arrangement Beethoven made of the Violin Concerto. Many will be relieved to hear that the over-exposed Triple Concerto is not to accompany the usual five!

This series has several advantages; apart from the excellent players themselves, it uses the New Beethoven Edition version of the concertos, embodying the latest scholarship on the available texts; it uses the Tapiola Sinfonietta, which is a 46-strong orchestra formed expressly to specialise in the Viennese Classics, and finally the works are both played and conducted by Olli Mustonen, who has worked closely with the Tapiola for many years. Bearing in mind the early date of these concertos, that they were composed for the young Beethoven's attempts to establish himself as a virtuoso pianist after his arrival in Vienna from Bonn, and that the classical orchestra was still developing in both composition and size, this new venture attempts a compromise between performance on period instruments and playing on modern instruments in a historically-aware manner. Both Beethoven and Mozart conducted as well as played their concertos. With smaller orchestras than we have today, that was a perfectly practicable arrangement, with many gains in personal interactions and dialogues between the solo pianist and soloists in the band.

The first disc gives us the so-called First and Second concertos, but in fact they were composed in reverse order. The writer of the sleeve notes, Dr. Hans-Werner Küthen (editor of the New Beethoven Edition Concertos), reminds us that the work published as Op.19 was begun in Bonn, but not published until after Op. 15. In both cases Beethoven was using Mozart's concertos as models, not just for form and style, but also for melodic content; Dr. Küthen points to Beethoven's quotation in the C major concerto of melody from Mozart's Idomeneo, as well as material from Bach's Partita in B flat major. If you play these concertos in their correct chronological order in Mustonen's version, you can immediately hear the progress that Beethoven made from the B flat major to the C major.

These performances, so fresh, full of life and ideas, reminded me of the voyage of re-discovery that I made with the set of former Jazz pianist Gulda with the Suisse Romande and the first 'period' one with Lubin and Hogwood's Academy of Ancient Music. In the Ondine disc, the balance between piano and orchestra is ideal, the piano tone kept suitably light and buoyant with very little pedal, the woodwind delightfully in evidence. Violins are divided across the stage, with the basses (not assigned independent parts by Beethoven until the Eroica) to the left and the cellos to the right. Musical conversations between firsts and seconds are clearly revealed. Trumpet and kettledrums (played with the harder sticks than used today) are added in the C major. Pianist and orchestra seem at one, playing off one another with such sparkling wit, fun and fantasy. The slow movements are serene pools of beauty, not rushed. They are phrased with light and shade, but never dragged into the lush Romantic excesses of some interpretations. Mustonen is a very rhythmic player, and follows impeccably the many accents and sforzandi with which Beethoven peppers the scores, delighting also in the jazzy syncopations. He brings out Beethoven's love of wicked satire with these rhythms, and reminds us of the composer's favourite hobby of starting his friends with sudden loud crashes or shouts of "Boo!". Near the end of the first movement of the C major, Beethoven follows Mozart by putting in an unexpected adagio, with a brief, lingering cadenza, from which Mustonen and the orchestra suddenly launch forward with total brio into the last few bars. This brought me to my feet to shout 'Bravo!'.

Mustonen provides his own fine cadenzas for the C major which are not at all anachronistic, and carries off Beethoven's own cadenza for the B flat major with great style. Of course, both Mozart and Beethoven would usually improvise their own cadenzas at each performance, but only wrote them down to help their students.

My overall response to this disc is very positive indeed; it gave me a vary happy hour or so of meeting old friends in new clothes, hearing many things which I didn't remember before, particularly inner parts from the orchestra and countermelodies from the piano (some from the new text, others from Mustonen's own creative insights; he has clearly studied both Beethoven's character and milieu deeply. Perhaps some people will find his style a little too unconventional; but I recall Mahler's retort to the gentlemen of the Vienna Philharmonic rehearsing Beethoven with him. They stopped and complained that what he was doing was not traditional. Mahler retorted "Tradition ist schlamperei!" (Tradition is slovenliness!).

As to the recording, I have already referred to the excellent balance and sound-staging. It was put down with the new extra-high resolution DXD 5.0 and mastered with DSD. There are some lovely moments of rich tone in true pianissimos, and the orchestra never threatens to overwhelm the light textures of the piano, as often happens with a full modern symphony orchestra. I can hardly wait for the next issue in the series!

In summary, this will probably be one of my top SACDs of 2007; moreover it is a wholly Finnish enterprise, and underlines yet again the richness and vibrancy of the modern Scandinavian music scene. 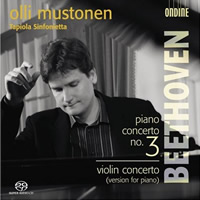 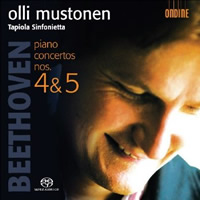