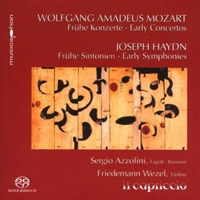 This disc offers us performances on period instruments (not copies) of two Mozart concertos which recent research has shown to be from his earliest essays in concerto form (Concerto for Bassoon in B flat major, K 191/186e and Concerto for Violin no 1 in B flat major, K 207). The concertos are interpolated with two of Haydn's earliest symphonies, not numbered in the usual canon but fairly recently authenticated and published as Symphony A and Symphony B.

Uniquely, the bassoon used to play the 17 year old Mozart's concerto is an instrument made at the turn of the 18th and 19th centuries by Kaspar Tauber of Vienna. It was an evolution from the former baroque bassoon with its 8' tone, used as a bass in orchestral situations. Mozart may have been anxious to give the newly capable instrument a show-piece, perhaps for performance by the bassoonist of the Saltzburg orchestra. Its range goes down to a tone below the lowest cello note, and like many of these period instruments, its tonal qualities vary with pitch, much more so than with modern instruments. The deep notes are quite powerful and liquid-sounding, lower mid is almost saxophone-like, while the upper mid is soft-edged and expressive and the upper ranges more nasal than reedy. Composers valued these differences and adopted their writing accordingly.

Il Capriccio are a medium-sized chamber group playing with period instruments and with period style. There is clear evidence that whether indicated in the score or not, orchestras of this period would usually double the string bass with a bassoon, a common practice before the days of stand-alone conducting. All Il Capriccio's performances here are also directed from the bassoon. Soloist Sergio Azzolini, a former pupil of Klaus Thunemann, is a specialist in baroque and classical bassoon playing, and also the chamber orchestra's bassoonist.

The bassoon concerto is brilliantly played by the whole ensemble; it begins with syncopated chords from the high B flat horns and proceeds very happily with buoyant rhythms and great vitality. Mozart plays off the comic (staccato) and soulful (cantabile) styles of the instrument, and its sounds are quite delectable. The slow movement has muted strings, which really sound very different on period violins, supporting the songful bassoon. The ensemble here is magnificent, a most endearing performance, with a thoughtful cadenza near the end. The Rondo, in minuet tempo, concentrates for contrast on staccato running passages, full of wit, elegance and sheer fun.

The first of Mozart's violin concertos (1773) is also played on a real period instrument, and a very beautiful one too, a Testore of 1703 together with its contemporary bow. Friedemann Wezel, the founder of Il Capriccio, gives an affectionate and stunning performance. The music is unselfconsciously happy and full of beauties - the epitome of youth given full rein. There is nothing scratchy or aggressive about the playing either of orchestra or soloist; everything comes together beautifully, making for compelling listening.

The two Haydn symphonies are not make-weights. Symphony A is in three movements, as were many of the early symphonies (being developed from opera overtures or sinfonias), whereas Symphony B has an extra movement, a menuetto placed second. Again the playing is wonderful, fully exploiting Haydn's witty lines and dramatic flourishes, and displaying all the beguiling colours of the old instruments. There are characterful winds, brilliant brass and agile strings, all played with tempi which seem completely natural. Il Capriccio seem to have a real flair for Haydn, as do the Combattimento Consort of Amsterdam, and I would love to hear them do some of the later symphonies as an alternative to Fischer's series.

Everything is right with the 5.0 true DSD recording too, which is completely at the service of the music and performers. The room used sounds to be an appropriate size for the orchestra, and it has a warm acoustic giving space for expansion of climaxes. In multichannel it is stunningly realistic. Neither of the soloists are highlighted, but instead appear to sit in the orchestra, as they would have done in Classical times.

The booklet gives a lot of detail in German and English about the origins and dates of the pieces on this enterprising programme, as well as information about playing practises. It is good for once to see that the English translation is a good one.

I must mention a tiny caveat for people who have supersensitivity to extraneous noises on recordings. There are some clicks and clacks from the bassoon key action at times. I find this endearing rather than irritating, and indicative of the humanity at work. We may surely allow a lovely instrument to wear its centuries so lightly!

This is a winsome. big-hearted set of performances and a perfect-sounding recording of music which astonishes us again with the talent that both Haydn and Mozart had so early in their careers. Do try it.