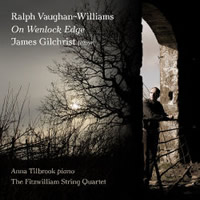 A first rate disc on every count.

Opening with Vaughan-Williams setting of excerpts from Housman's "A Shropshire Lad", On Wenlock Edge we find ourselves transported completely by both the music and performances in which the one constant of the set, James Gilchrist, is joined by Anna Tilbrook and the Fitzwilliam Quartet. To sample the range of expression, try the opening to "Is my team ploughing" where all open sotto voce before a more turbulent recollection of horses trampling is bought vividly to life. This and the evocation of the bells of "Bredon Hill" are not the only triumphs of both the score and performance; the impish wit that Gilchrist imparts in "Oh, when I was in love with you" is fully matched by the instrumentalists. Nor is the brooding, disturbing calm underplayed at the end of the work either - a superb rendition all round.

Moving on to Peter Warlock's "The Curlew", in which he weaves Yeats' "He reproves the curlew", "The lover mourns for the loss of love", "The withering of the boughs" and "He hears the cry of the sedge" into what Warlock himself described as a 22 minute "kind of symphonic poem" scored for tenor, flute (Michael Cox - principal of BBC SO, ASMF amongst others), cor anglais (Gareth Hulse - ex-principal of LPO, now London Sinfonietta and Nash Ensemble) and string quartet. A work of almost unremitting bleak desolation, all the players wring the notes from their instruments with a torment that is only matched by the beautiful anguish in Gilchrist's voice - astonishing musicianship.

Bliss then takes up the musical mantle to set Day Lewis' Elegiac Sonnet, which adopts the same forces as the Vaughan-Williams but for a much smaller time-frame. Opening with an extended solo for the piano, Tilbrook takes her chance to shine before being joined in the richly scored and opulent work by the other protagonists, notable for its sweeping grandeur.

The closing work "Ludlow & Teme" by Ivor Gurney also uses the same forces as the Vaughan-Williams; indeed it is audibly inspired by "On Wenlock Edge" and also sets poems from Housman's "A Shropshire Lad". Even though this is derivative, musically speaking, at no time does one sense that any of the performers, not least Gilchrist treat the work in anything nearing contempt. Fortunately, much of the music is of a lighter note than that which it precedes - more would have been too sorrowful for even the most wildly optimistic soul to take. Gilchrist and the others are audibly cheerful in their delightful rendition and I was listening.

The recording is very nice indeed, capturing Gilchrist's voice perfectly and allotting a rich yet clear tone to the piano and a fine account of the Fitzwilliam's sound.

With comprehensive notes and evocative photography it is hard to imagine this disc being improved upon in any way imaginable.