Is it possible for a recording to be too good? I was really impressed when I first listened to this SACD. The sound is delightful for its detail, texture and dimensionality. ... 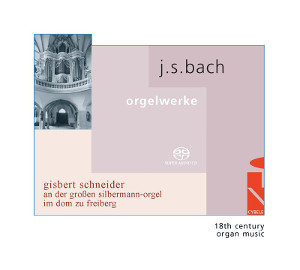 This is another successful foray into the mainstream of classical music from Cybele, a company that is more used to issuing discs of modern - and usually avant garde - music on SACD than that of the great J.S. Bach.

Gisbert Schneider is not an organist that I was previously familiar with - he plays the great Silbermann organ in Freiburg Cathedral with great skill and sensitivity as well as a wonderful sense of pacing within each piece and across the recital as a whole. The registrations are chosen with care and with an ear to variety (although not just for the sake of it). In this well thought out program, we open with the Prelude and Fugue in C minor BWV 546 and it closes with the Passacaglia BWV 582 of the same key.

Compared to other Cybele issues, the notes are briefer but lose none of the usual clarity or insightful properties to which I have become accustomed. Thus we have a diagram and explanation that details the structure and content of the Partita BWV 768 on "Sei gegrüßet, Jesu gütig" as well as the more familiar works contained here.

All the pieces included are included are performed to a high standard which makes it hard to pick one out for sampling. One that is particularly interesting is the rendition of the chorale "Nun komm, der Heiden Heiland" where Schneider realises the piece in a way that shows just how skilful Busoni was when he transcribed this gem for piano - a moment of musical magic.

The recording is very natural, with the listener placed far enough away from the pipes for a cohesive image to be presented - that is not to say that the individual pipes (especially lower down the registers) cannot be identified but the aural is not jumping around the room as some recordings I have heard sometimes present the instrument.

A lovely one-disc introduction to some great works of Bach that, mercifully, allows one to avoid the ubiquitous "D minor".