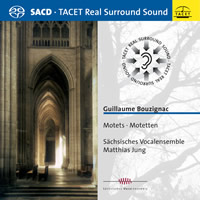 As I suspect with most listeners, the name Guillaume Bouzignac is new to me. These are some of his motets (there are at least 5 more not included here but the notes are not clear on this point) and there are Chansons and Masses that also deserve a recording or two if the measure of this music is anything to go by. Normally, when one encounters a composer after such a long absence from the platform I become suspicious as to the quality of the music - if it was any good, it would surely be commonplace now? Well, there are exceptions to every rule and this is one of them for the music is quite beautiful and entrancing. Unlike much of the music of his contemporaries, Bouzignac manages to plumb real emotional depths.

Unusually for these times, the music is radiantly sung by the Sächisches Vocalensemble under Matthias Jung with large forces: in no way is this the sort of approach that The Sixteen or The Tallis Scholars have employed to great success in this era of music. As a result, there is a greater depth of tone and dynamic range than one would normally anticipate hearing. A potential downside is that the vocal purity of just one or two singers to a part is somewhat diminished here, even though the quality of singing is high, the Sächisches Vocalensemble are not (yet) the equal of the Monteverdi Choir in this respect.

The programming has been constructed in a very clever way so that jubilant motets follow more introspective and gloomy affairs, giving a wonderful feeling of balance throughout the disc. The soloists employed are all members of the Sächisches Vocalensemble and they are of a uniformly high calibre. The programming is also ingenious in that it varies the textures from track to track - a feature that the "TACET Real Surround Sound" MCH layer exploits to full; there are no less than 18 different configurations employed! This is one of those features that those who have heard similar either love or loath - for me, in this repertoire more than others that TACET have given this treatment, this makes the textures beautifully clear and appreciate the music far more than in "plain" stereo. Gorgeous stuff!

The only complaint I can make is that there is no English or French translations of the motet texts (even on TACET's website)...