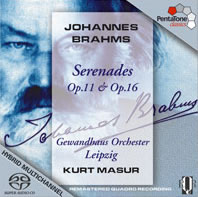 After some recent RQR releases, I was beginning to fear that Pentatone was nearing the bottom of the barrel of Philips' archive - I need not have done so on this account!

Firstly, the sound - how beautiful it is; dating from September 1981 this is surely one of Philips' last forays into the realm of MCH recordings until they started again in the mid/late 1990's. Because of the relative modernity of the recording there is absolutely no need to fear a deterioration of sound; nor, I suspect, is this an early digital recording (the notes are not ideally clear on this matter) for there is none of the digititus that mars many a 1980-something release.

All of this would, of course, be no good if the performances were not of the same calibre and they are! This is a delightful document of a great orchestra enjoying one of its many heydays and Masur directs them in glowing, rustic accounts of these early Brahms compositions. For those beginning to get nervous, fear not! This is far from the rusticity of some - think more of VPO in the 1970's playing Beethoven's "Pastoral" symphony and the sounds are not too dissimilar. There is far more warmth though than would typically have been granted to Beethoven and the feeling of joy permeates the readings. When the musical mood darkens, the clouds do appear on the horizon but they are quickly banished. A particularly enjoyable account is that of the Second Serenade which, without violins, has an autumnal feeling that is still radiant in its execution. Also, unlike Pentatone's modern Brahms release (Brahms: Symphony No. 1 - Janowski) here is an example of Brahms conducting that is entirely natural in feeling with completely idiosyncratic rubato.

Beautiful. The only and the most accurate word to describe the present recording of Brahms’s Two Serenades, recorded quadraphonically in 1981 at Gewandhaus and painstakingly remastered as such in DSD by Polyhymnia International B.V. Although Pentatone offered to us dozens of remastered quadraphonic recordings on SACD by Decca/Philips back then, it’s a fair assumption to estimate there still are unreleased 4-channel recordings left. 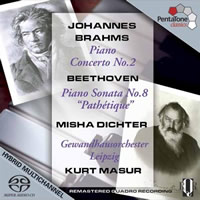 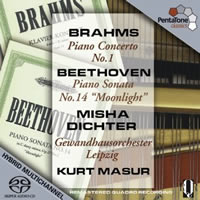 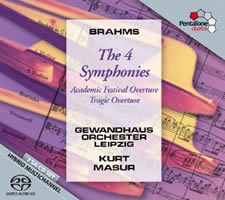