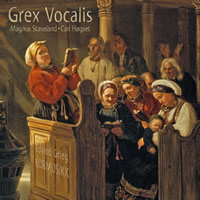 
Edvard Grieg's vocal output is rich, wide-ranging - and heterogeneous. He seems to have felt equally at home in any kind of writing technique, his oeuvre consisting of anything from small children's songs and burlesque folkloristic compositions on anonymous texts to grand-scale religious works and dramatic song cycles based on poetry by internationally outstanding Norwegian poets.

GREX VOCALIS conducted by Carl Høgset takes us on a journey to Grieg's musical treasures. With Magnus Staveland as soloist we venture into the heav'n with Four Hymns after having explored the joys and sorrows of life in Children's Songs and Album for Male Voices. En route we are presented the evergreen songs Last Spring and Ave, Maris Stella.

Another triumph from Norwegian company 2L. The unaccompanied choral works of Grieg are poorly-known outside Scandinavia, where they are part of an age-old choral tradition. I first heard them in Norway from an Simax RBCD in 1987, and fell in love with them then. There is an astonishing range of form, texture and emotional content in these works, even within each opus group. Often, "complete works" discs in a single musical medium are better dipped into rather than listened to completely, but 2L have taken advantage of this diversity to provide a programme which takes us on an involving and satisfying musical journey. The songs follow each other quite rapidly, and one is simply unable to stop listening. Soloists appear from time to time to commune with or discuss with the choir, adding to the interest.

It was nothing short of an inspiration to interleave the short songs of the op. 30 Album for Male Voices with the op. 60 Seven Children's Songs for female chorus. When the crystalline purity of the women's voices entered after the macho men's vigorous rendering of the first song, the hairs stood up on the back of my neck.

Lovers of choral music will revel in the challenges which Grieg presents to his singers. There are all sorts of unique textural devices to delight the ear; indeed even the simplest of these songs are conceived in orchestral terms, so colourful are they. Grieg exploits the Norwegian speech rhythms to the full, even using the C16th technique of 'hocketing', tossing a single phrase amongst the singers in a complex rhythmic way. Harmonically, there are often highly advanced for their time, Grieg even sometimes going beyond Debussy's impressionism to anticipate something of the Second Viennese School. For all this, the music is often just plain good fun. Listen to Båden-Låt from op. 30, the first song on the disc, and one of my favourites. The middle section involves what I can only describe in modern terms as a 'Miaow-In', a hilarious imitation of cats which would surely have the audience of any International Choral Competition on its feet at the end.

Grex Vocalis are a great choir, and their soloists are superb. Such discipline and precision in these often difficult works is exceptional, as is the remarkably unified choral enunciation. The words are so clear that I was able to follow them even with my elementary Norwegian. They are given great presence within a church acoustic which never blurs the words or musical lines. The DXD recording and DSD post-processing has produced amazing detail; you can pinpoint the unique individual voices of each singer in the group standing between your front loudspeakers. Full use is made of the wide dynamic range, so that the softest singing still has great depth of tone, while the climaxes soar to thrill without the slightest hint of distortion. My only miniscule regret is the SACD format, unlike DVD-A, does not give enough space for an additional full surround presentation of some of the songs; imagine those cats calling from all around you!

Presented in 2L's usual stylish manner as a light card gatefold, in Norwegian, English and German, with very useful essays about the music, giving fascinating details on the origin of many of them.

I gather that another recording of the Grieg Choral Works is in the offing from BIS. Who can complain: you can never get enough of a very good thing!

Unlike Magnum Mysterium - Grex Vocalis, this disc from 2L and Grex Vocalis can be given an unreserved recommendation. I should add that I have not (yet) had time to listen to Grieg: Choral Music - Pedersen but from the works included there, this seems to represent a more varied output of Grieg's music - the BIS disc is more reverent in tone overall.

There are many delights here (not least the Children's Song Op.30/2 with the famous "miaow"'s) and some familiar tunes in less familiar guises (like the choral Last Spring more commonly heard in the arrangement for string orchestra). The first 19 tracks mix up, very effectively, the Album for Male Voices Op.30 and Seven Children's Songs Op.61 and the contrasting textures and moods work wonderfully here with the freshness of the singing and direction.

These are followed by Last Spring where, thanks to the immediate recording, the ear is entranced by the choral lines instead of pining for lush strings - indeed, it is all the more poignant to have the texts (presented in Norwegian, English and German) for this wonderful song. Before the last collection of songs, the Whitsun Hymn and "Ave, Maris Stella" are presented lovingly. Unlike the more carefree and humorous opening numbers, the Four Psalms Op.74 are somewhat more reverential in approach and make a wonderful contrast to what has gone before. Throughout, Carl Høgset directs Grex Vocalis and his soloists (Magnus Staveland - tenor, Daniel Oskar Danielsson - bass-baritone) with sensitivity, joy, repose and solemnity as the music requires.

The recording is, as mentioned before, immediate and were it not for the immaculate singing there would be a great many grounds for complaint. I know that some will prefer to be placed further away from the performers but with singing of this quality and purity few would object to having front row seats. The sound staging is a little flat because of the immediacy but there is still a very clear picture of the choirs disposition. A Tacet-style rendition of Op.30/2 would have been an excellent encore just to give a little sonic spice to an otherwise faultless issue - but this is definitely being churlish!

2L have put together another remarkable disc of vocal recordings, this time by Norwegian composer, Edvard Grieg. Although Grieg is not generally recognized as a composer of Choral music, this collection should remedy that.

The Grex Vocalis once again show their stunning skill and talent as choral singers in these spirited and exuberant performances. Listen to the light-hearted tunes in the Album for Male Voices, (Op.30) and the Seven Children's Songs (Op.61), mixed together to form the first 40 minutes of music in this collection.

The Album For Male Voices, (Op.30) features several light and sprightly tunes. The singers sometimes create the rhtythm of the song using only basic syllables. The Seven Children's Songs (Op.61) is sung by female voices only, creating a nice contrast to the Op.30 tracks. Listen for the antiphonal effects across the front speakers in some of the tunes from Op.30.

We are then treated to three very beautiful songs, including Last Spring, Op.33, Whitsun Hymn and Ave Maria, Stella. The Last Spring is surely one of the most beautiful melodies I have ever heard and is certainly a highlight in this collection. The tune has great depth of feeling and is practically worth the price of this disc alone!

The remainder of this disc concludes with The Four Psalms, Op.74, which form Greig's very last compositions. I personally found these Hymns required the most listening to be appreciated, but they are surely some of the most sublime music that Grieg composed and form an admirable close to the composer's career.

Grex Vocalis sing with one, strong, focused voice and the DXD sound only makes these recordings all the more immediate. This is a most impressive sounding recording. The DXD sound brings the Grex Vocalis right into your living room in a warm and enveloping sound. The recording is so accurate and detailed that the breath of the singers can sometimes be felt by the listener. Vocal crescendos are very dynamic and impressive. The sound is not overtly reverberant which helps maintain the clarity in the voices, although I do wish the sound was just a tiny bit smoother, but the depth is just right. I wouldn't be surprised if this disc gets a Grammy nod like the Immortal Nystedt disc did. In fact, I would say this disc, as well as the others by 2L have deepened my appreciation of Choral Music a great deal.

The disc also features notes on the music and the sung texts in three languages in the accompanying booklet within an attractive digipak. These spontaneous and inspired performances can easily be recommended to all lovers of Choral music. This disc can only further enhance 2L as one of the leading labels to produce exquisite choral recordings on SA-CD and will surely solidify the reputation of Grex Vocalis and their leader Carl Høgset as one of Europe's leading choral groups. Highly recommended.