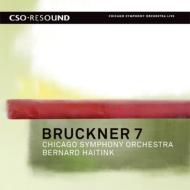 A belated welcome to the great Chicago Symphony Orchestra on SACD in a modern, symphonic recording.

Haitink of course has set down many accounts of this symphony on RBCD and the many years of wisdom that he has accumulated are obviously bearing fruit in this compilation of four concerts taped in May 2007. Tempi are almost identical to Wand's BPO account (there is a total of 1 minutes difference in the entire symphony), yet Haitink chooses to take a less profoundly spiritual approach to this work. Instead this is an account firmly rooting the work in a symphonic tradition, emphasising the structural cohesiveness rather than the Wagnerian elements.

The lines are long and gloriously sung by the Chicago players: rarely have they sounded as good as this since Barenboim was allowed to take the helm on disc or in the hall. [Having seen them together, time after time on tour, I could never understand why an exciting orchestra would choose such a musical bore but here is not the place to fully expand this argument.] The dynamic contrast and tonal variety are both greatly expanded and enriched under Haitink's watchful eye - indeed he is not content just to present the longer line, there are details aplenty bought by his baton and the thoughtful response of the Chicago band.

To those more accustomed to a European orchestral sound then the brass sound will be bright, very bright. From my experiences in the concert hall, this is most definitely the orchestra's sound not the engineers doing and after a couple of listens the ear quickly settles to this timbre. The strings are rich but without the last depths of tone that the great Philharmonics of Berlin and Vienna can conjure - it never spoils the enjoyment nor the musical argument (the difference is small indeed). Instead, their sound is more akin to the Concertgebouw's (surely no coincidence here) and is well suited to Bruckner's great essay; I have rarely heard the coda to the Adagio sound so glorious than in their hands and I have returned with great relish on many an occasion.

The sound is very fine indeed - beautifully balanced and a lovely well rounded tonal picture. The one issue I have with this disc is that about 7'30 into the first movement, there is a noticeable edit in the pause; no click but the tonality of the orchestra shifts ever-so-slightly but certainly audibly. The brain adjusts to this on repetition but on first hearing was very jarring indeed - surely there was a way of sorting this out or perhaps no-one noticed? That aside, the only other aspect that listeners may find troubling is the audience: it is occasionally audible during the music (not frequently) and they have also clearly been excised at the end. Perhaps the audience needs a little more reminding at concerts that are to be taped that their contributions become tiresome with repeated listening because I would hate for the orchestral timbres to be diminished by closer miking.

Apart from the minor editing fault, this is a wonderful addition to the SACD library and one which I wholeheartedly recommend to those both new and experienced in works of the Bruckner canon.