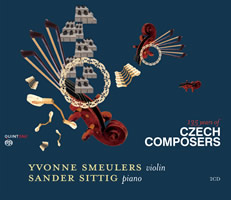 The Dutch company Quintone is new to me, and I was attracted by this 2-disc survey of Czech music for violin and piano from the middle of the C19th to the early decades of the C20th. The players are both well-known and acclaimed young musicians from Holland, having won many prizes both for their solo work and their duo partnership, which began in 1997. Yvonne Smeulers made her debut at the Amsterdam Concertgebouw at the age of 10 (!) and plays a 1785 Guadagnini instrument, whose burnished tone is one of the set's features. Pianist Sander Sittig is presently a teacher of Chamber Music at the Rotterdam conservatory; he ably fits the great Gerald Moore's description of "Unashamed Accompanist"; together they form an impeccable duo who listen to each other and clearly enjoy making music together.

Making music is what these discs are about. The first one contains music written for the middle classes during this period whose main entertainment in their parlours and salons was for family and friends to play together. Composers relied greatly on this large market, which spread across Europe and into the Americas. Czech music was very popular, as it was regarded as exotic in its Nationalism, with folk tunes and melodies, and the music here, from Smetana, Dvorák, Fibich and Novácek is of very high quality and would require quite gifted amateurs for its execution. The Smeulers and Settig Duo respond magnificently, never overplaying and falling into mawkish sentimentality, so that even the old warhorse of Fibich's lovely 'Poem' sounds fresh and delightful.

I particularly enjoyed the Dvorák Sonatina, his 100th composition, written for his children and played by them while he was on one of his visits to the USA. Not in any way patronising the children, it is a superbly constructed piece, full of the Dvorák of the 'New World' Symphony. A research student who was a violin player and I used to try and play it together; I was thrilled to hear it again, in the safe hands of Smeulers/Sittig who clearly have great affection for it.

The second disc moves into the more meaty or 'serious' works of the next generation of Czech composers, and with compositions designed for the professionals as well as the extremely gifted amateurs. The deeply concentrated Janácek Sonata is both technically and emotionally demanding; written during the Great War it is a highly original work, from its uniquely startling opening, through its episodes of wildness and sections of gentle lyricism. The duo play it superbly, very much con amore. Smeulers gets a chance to show off her virtuosity in the unaccompanied Schulhoff sonata, with its jazzy roulades of double stopping combined with pizzicato notes. Martinu's Madrigal Stanzas were quite a discovery for me; dedicated to Albert Einstein (a capable amateur violinist himself) they form a suite full of rich melody and rhythmic surprises, generously played and finely nuanced. Likewise the 4 Pieces by Suk, story-telling in music at its finest, full of Czech folk dance allusions and drama which the duo clearly relish.

The 5.0 recording, made in a Dutch church, is presumably high resolution PCM, but a fine specimen of its type. The sound is intimate but with air around the instruments, and no church reverberations cloud the details. The rear speakers in MC discretely add to the atmosphere. Mastered at quite a high level, one can easily find the right playing volume, where the pianist is behind the violinist, and it seems they are visiting your own drawing room or salon. The discs are presented in a 3-fold Digipak with a detachable booklet of notes. It would have been helpful to have the contents list reproduced in this, rather than just on the back of the Digipak, which is a little cumbersome to hold.

Summarizing, a very fine and fascinating set, which I have already played through several times with increasing pleasure. Recommended for lovers of good chamber music and fans of Czech music, it is more than just an informative survey of 135 years of musical history.