This is a great mastering - this is exactly the same mastering as PROZ-1095 - it's just a single-layer SACD and lacks the Redbook CD hybrid layer that release has.

DYB, I think it's apparently not intended by this side to allow private communication between members. I'd enjoy some private discussion with a few members here. - I have no ...

I think you are being optimistic John. Since Pentatone has moved to becoming an artist rather than a repertoire focused label they have also subtly moved from SACD to RBCD ... 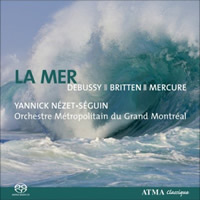 A disc that shows the potential flair that Nézet-Séguin has clearly excited in the orchestral world but in doing so, all too clearly highlights the limitations of some in the orchestra.

La Mer is one of those extraordinary pieces of music that can stand very different standpoints but equally makes few allowances for those instrumentalists who are unable (or unwilling) to make the most of the phrases written into their parts. Nézet-Séguin clearly has the measure of the piece for there are many moments of excitement and the overall frame is well thought out; there is a severe lack of musicality on display from the first flute and at times the upper strings seem to play remarkably "safely" as if what Nézet-Séguin wanted is just beyond their collective competency. The eddies that the violas and cellos point so beautifully in the opening movement are a world away from the boring "games" of the second - clearly this ocean was tired and wanted a nap! A great shame for this account could, with a more responsive orchestra, been very fine indeed.

The closing Debussy is equally demanding on the performers if it is not to come across as a stale and flaccid monument of sound. Sadly similar problems to La Mer emerge - when the oboes and horns upstage the flute (even when they are accompanying) something is seriously amiss! Yet this fault cannot be laid at the foot of Nézet-Séguin as most sections of the orchestra demonstrate. Again, one is left wondering "what if Nézet-Séguin were conducting [insert name of orchestra here]?"

Between these two disappointments come two very different works, Britten's Four Sea Interludes (sadly shorn of the Passacaille for which there is easily enough room on the disc) and Mercure's Kaleidoscope. Perhaps because the orchestra is less familiar with these compositions their response is far more dramatic and for the most part, really quite captivating. They respond with great relish to the austere textures of the Britten and are audibly enjoying themselves in the Mercure (although this is less kaleidoscopic than many a Mahler movement or indeed much of Ravel's music). If only they had not shown such a complacent attitude in the Debussy...

The sound is better from the Saint-Nom-de-Jesus, Montreal than in their recent Bruckner 9 but the reason that most listeners would probably choose to buy the disc for in the first place (the Debussy) is far too poor to give a recommendation. Hopefully Nézet-Séguin will have further opportunities in this repertoire for he shows genuine flair here.