For the first time, the Rolling Stones were able to release an album with the same tracklisting across the world.

It seems entirely appropriate that the most unusual of all the band’s albums – the one that polarizes opinion among fans and critics alike – should be the first to be released on both sides of the Atlantic, and around the world, with the same running order and in the same sleeve. Recorded between February and October at Olympic Studios in Barnes, West London during what was the most difficult time in the band’s career, against a background of personal issues and criminal trials, it is an eclectic mix of music that includes “She’s a Rainbow” which made No.2 in America and second record that was released as a single in America as, Bill Wyman’s “In Another Land”, Bill wrote the track and it features Steve Marriott from the Small Faces on vocals. There were no UK single releases from the album that took its inspiration for its title from the words inside a British passport, “Her Britannic Majesty’s Secretary of State requests and requires…”. 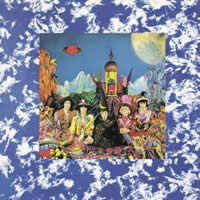