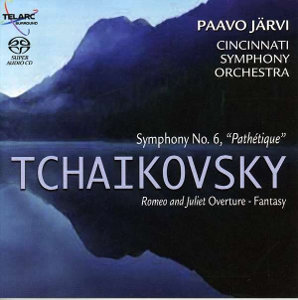 Choosing between the available recordings of Tchaikovsky’s 6th Symphony is by no means an easy task. So far there are no less than 19 different super audio versions. Even if we take out the older, ‘refurbished’ ones, as well as the ‘Japan only’, there remains a choice of 9.

What I suppose most of us do with such an ‘embarras de choix’, is checking with various sites, looking for clues that might help. What becomes immediately apparent is: so many people so many preferences.

A Tchaikovsky symphony, and certainly the later ones, cannot be compared to a pleasing piano trio, which, well played, will suit most tastes. For Tchaikovsky we are much more demanding. Some want more passion, others more drama and others again, more ‘noise’. And in many a case, expectation or cultural tradition may also play a role in someone’s appreciation: the whack on the bass drum that didn’t come off as loud as expected or the waltz that wasn’t as Viennese as it should have been.

If one were to take as guiding principle that Russian music is best played by Russian musicians, than one also has to answer the question ‘how Russian was Tchaikovsky’. The answer is that fellow Russian composers, notably the group of five, and in spite of his occasionally using Russian folk music, reproached him to compose too much in a western tradition.

A fine choice from the SA-CD catalogue would be Daniele Gatti and the Royal Philharmonic, about which there is a great deal of international agreement. The drawback: in super audio there only are a few copies still available and hence quite pricy. Fortunately there are alternatives well worth exploring: Eschenbach/Philadelphia; Kitajenko/Gürzenich; Pletnev/Russian SO; Masur/Gewandhaus (as a possible outsider, samples available on the site of Querstand.de) and new ones coming to the market, like Dausgaard/Swedish CO. Even the much praised Mravisky is back, but in stereo and single layer only.

I have chosen Paavo Järvi with the Cincinnati Symphony. It is not all that new and its reception on this site has been mixed and, quite frankly, rather confusing. But since comments elsewhere were much more positive, I decided to give it a chance. I bought the disk and here we go:

First of all I have to admit that I like Paavo Järvi’s style. A natural talent, who is able to draw clean and precise playing from his musicians with a simple nod of the head, an almost unnoticed gesture from the left arm or a wink of the eyes; but this seemingly introvert posture does not mean that there is no emotional substance. I believe that these combined elements constitute the essence of his reading of Tchaikovsky’s ‘final thoughts’. He gets into the score and shares all the emotions with the listener, without becoming too carried away or trying to show off.

For comparison I had at my disposal his father’s performance with the Gothenburgers and the above mentioned Italian/UK combination of Gatti and the RPO. Since few will disagree that, at present, Paavo outweighs his father, Neeme, I shall limit myself to Gatti only.

Comparing playing times shows that Gatti is the faster of the two. But in this kind of orchestral works it’s an unrealistic yardstick, as it does not say how timings differ in the course of every movement.

Whereas my overall impression is that Paavo Järvi takes more time to get his vision across, Daniele Gatti doesn’t seem too much in a hurry either (in fact he is slower than Järvi in the first part of the first movement). As for the second movement one can only wonder: Do Italians waltz faster than Estonians? In the overall context, however, this is a non-issue, both do it equally well.

For real differences we have to look at the other movements. Järvi’s approach seems emotionally more controlled than Gatti’s, who, indeed, puts more stress on drama. But this is only partly true. Järvi may be a shade more contemplative at the start of the Symphony, he later on, after the clarinet solo in the first movement, jumps straight into the mood of passion and impulsive activity as meant by Tchaikovsky. Moreover, Järvi’s reading is intelligently and beautifully shaped throughout, building up tension quite naturally, like the dramatic climax in the first movement, the frenzy in the third and the last ‘outcry’ in the final movement.

In the third movement Järvi keeps emotion and clarity carefully balanced at a pace which is, like Gatti, more controlled than others, say, Pletnev, rushing to a climax, loosing detail on the way, usually ending in everybody clapping in a concert hall. But that does not mean that Järvi’s result is less spectacular.

In fact, as the symphony develops, one sees the architectural structure that is being build. From the third movement onwards tension grows further and further. Emotion creeps under your skin and keeps you alert.

It is in de concluding movement where, in my opinion, Järvi surpasses Gatti ‘s “sweet dreaming" phrasing, where his version loses steam and involvement. I could not help thinking: “this is an old man falling asleep, with one final ‘surge’ and then he’s gone”.

Järvi turns the final movement into the best part of the symphony: Agony giving way to the ultimate acceptance of fate, followed by complete resignation.

A word on sound is, I think, justified. Some have complained that there were too little strings, or too much bass and that, overall, the recorded sound not was what it used to be with Telarc. I’m not familiar with the hall and its acoustical features, but it is a conductor’s responsibility that the balance between the instruments and instrumental sections is what he thinks it should be for the listener. Balance engineers sometimes think differently. Their choices may also be commercially motivated. ‘Natural sound’ disks are not always the best sounding and hence the best-selling ones.

Normally, conductor and sound engineer discuss before and after the performance issues relating to balance etc., deciding together on corrections if and where needed. When listening, I had a feeling that things were, from time to time, technically manipulated. As long as it is not too much to the detriment of the final result, I have no problem with that. It is like a wine merchant having to mix wines of various origins into a single good product. It is for the best of the consumer.

Much depends on your sound system. I did not experience any major problem. I was able to play at a higher than usual volume (in order not to miss the pppppp passages) without any clipping, congestion or fuzziness. As far as low bass is concerned, I would nonetheless recommend adjusting (or switching off altogether) the subwoofer. In the third movement there are some pretty loud whacks on the bass drum.

Although, in the final analysis, Gatti may win the day in the eyes of many, Järvi’s reading should by no means be regarded as the lesser one. His concluding movement is, unlike Gatti’s, amongst the best available. Moreover, his somewhat slower tempi allows him to be more precise and articulate throughout the symphony. And, notwithstanding some bass heaviness, the Telarc recording is on the whole better and more detailed, allowing instrumentalists (of this first rate ‘provincial’ orchestra!) to shine in the overall sound stage.

Romeo and Juliet seem to be the most favoured pairing. I now own three of them, all ‘married’ to a Tchaikovsky. Pärvi’s is not bad at all.