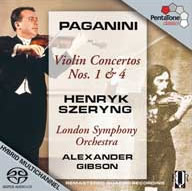 Another wonderful reissue from the Pentatone team, faithfully reproducing to modern ears the way that Philips Classics' tapes were surely always meant to be heard.

Although, by some standards, the music is slight (the booklet does however indicate how Paganini changed the musical landscape even without making allowances for the technical difficulties of the solo violin part) but the performances of Henryk Szeryng never seek to play to the aggrandising tendency that can all too easily be found in the music. Nor does (then plain) Alexander Gibson seek such a response from the LSO. The purity of line in the adagios is a rare quality displayed and Szeryng has nothing to fear from other violinists in his blend of musicianship and virtuosity (although he doesn't quite displace Salvatore Accardo from my affections). Some might find the allegro's a little under the tempi beloved of more modern virtuoso but they never flag and in many respects help treat the music with respect for the melodies contained rather than outright show-pieces - Szeryng is simply far too polite to descend to the devilish label beloved of commentators about Paganini and once or twice one wishes for a slightly more exuberant and extravagant approach.

The recording, made in Brent Town Hall, is not what is usually presented to listeners on SACD today - Szeryng is very closely scrutinised (never harmfully) and is given more prominence than in concert but this is still far from the worst excesses granted to violinists like Perlman. There is more hall resonance preserved than many modern recordings will allow but nothing distracting. The sound is remarkable in its solidity - the tapes wear their age remarkably lightly.

One of my favorites, definitely. The tone of Szeryng's violin is beautiful with warm resonance of the G-string. The original 4-channel recording opens the somewhat dry acoustics of the Brent Town Hall. Highly recommended. Hopefully the other Paganini recordings of this team (Violin Concertos Nos. 2 & 4) were also prepared for surround sound equipments.