Since December airmail — including EMS — has been suspended between Japan and Canada, so I've had to put a pause on ordering anything from Tower Records (and I find it's ...

I have a disc made from a original quad reel source and it have the same "pop" on Black Magic Woman. 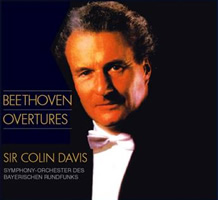 This SACD is something of a rare beast these days. It is a hybrid 2-channel DSD remastering of a CBS disc recorded in the Herculessaal, Munich in October 1985 and now issued by the Teac Esoteric Company as a limited edition. These seven Beethoven overtures, recorded a couple of years after Colin Davis had been appointed chief conductor of the Bavarian Radio Symphony Orchestra, are a testament to the monumental approach that Davis has always taken in his Beethoven performances. They are weighty, large scale (some would say old fashioned) readings of these overtures eschewing any suggestion of period practices. To many listeners the advantage of this approach is that the drama, power and seriousness of Beethoven’s epic creations are never short changed and I found them both exciting and immensely satisfying.

The Bavarian Radio Symphony Orchestra responds to Davis’s approach with total commitment and absolutely magnificent playing throughout. Strings are, by turns, lithe and rich, brass incisive and timpani firmly defined, while the perfectly blended and cultured woodwind playing sparkles with character. The recording captures the full range of the music’s dynamics with great accuracy and the very realistic orchestral image appears to wonderfully solid between the two speakers.

The accompanying notes are predominantly in Japanese, but with one page about the music in English. More information about the technical side of this remastering can be found at http://www.teac.com/esoteric/Cables_Accessories.html

It is also worth noting that all the performances are free from any vocalisations by the conductor that have sometimes marred his most recent recordings.