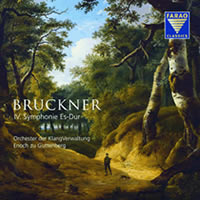 
When visiting the composer, Bruckner’s former teacher and lifelong friend Otto Kitzler advised him to get married due to his chaotic housekeeping. Appalled, the almost 50 year old musician replied that he had no time, and that he had to work on his Fourth. Because of the debacle at the world premiere of his Third Symphony, Anton Bruckner filed away at the follow-up symphony for a long time. The first version was created in 1874, the second version featuring a completely new Scherzo in 1878. Before its world premiere at the Vienna Musikverein in 1881, Bruckner once more revised the Finale. The result was triumphal. "Bruckner was called back four to five times after every movement. In a word: Bruckner was very well received, since last Sunday he ranks among our most important sound creators and has become a part of our common artistic property." wrote the Wiener Abendpost.

As was to be expected, Enoch zu Guttenberg once again presents an interesting, absolutely unique version of Bruckner’s phenomenal symphony. "I can merely conduct something that I really understand and that charges me emotionally." says the conductor. With this work, Bruckner sets out on a romantic journey. It is essential to translate his descriptions into images and associations of high dimensionality and luminosity. Images of rays behind foggy mountains, the hunt, the nature and environment of men, and time and again the diminutiveness of these men before nature and hence, before God. We try to express these images by means of sounds, notes, phrasings, and timbres, and bring them to life in the heads of the audience.

With a high consistency, Bruckner develops and conjures these images from but one single central musical building block – the motif of the descending fifth – from the very first moment of the symphony to every single movement. We follow him from the sunrise into the night, from towering summits to the desperately begging choral, from the illusion of a happy liaison back to the mourning of a lonesome human being – always by means of a plastic phrasing and in search of descriptive timbres, which sometimes come surprisingly close to Gustav Mahler’s music, but also conjure up St John Passion, not only in the last movement.

In the symphony’s finale buildup, Bruckner returns with the question of the mortal man about the truth of God, possibly from the majestic nature into the majestic halls of a cathedral. Enoch zu Guttenberg poses this question at the place where this music sounded for the very first time: for him, the long journey of the search for Bruckner’s truth found its answer on April 26th 2007 in the magical halls of Vienna’s Musikverein.

Zu Guttenberg is not a name one naturally associates with the interpretation of a Bruckner symphony. And the ‘Orchester der KlangVerwaltung’ looks (and is!) like a ‘band of occasional musicians’. Not a natural choice either if one has already two other super audio copies: Kent Nagano with the Bayerisches Staatsorchester (on Sony Classical) and Jaap van Zweeden, conducting the Netherlands Radio Philharmonic Orchestra (on Exton).

Well, I did buy it and I do not regret it. On the contrary. This is one of the best performances I've heard of Bruckner’s fourth. Comparison with the other two versions is not easy in the sense that all three are different. Nagano gives us the original (1874), with major differences in the Scherzo (completely replaced in the following 1879 version) and the final movement (reworked in 1880); Van Zweeden sticks to that latter version which is now generally regarded as definitive. Zu Guttenberg, however, has chosen the third 1887-89 version, seen by some as not wholly Brucknerian, although Bruckner did sanction the various changes in the score made by others before it was finally published in 1889. The booklet in this Farao production makes no mention of it.

Be that as it may, the approach of Freiherr zu und von Guttenberg with his musicians, selected amongst members of some fine orchestras, such as the Berliner, Wiener and Bayerischer Philharmoniker, is wholly convincing. It builds up from the beginning till the end in a magisterial way without resorting to dramatics and massive sound bursts. His lean, precise, yet sensitive and well balanced performance makes you forget the one hour and ten minutes of listening time.

In comparison: Nagano, who gave us a first class third, is in this fourth less convincing, and not helped with the quality of the sound recording. As for van Zweeden: it’s a good reading, depending on the purpose it was done for. But in any case nothing special. From the notes (mostly in Japanese) it is not possible to know if it is ‘just’ another radio session or a fully rehearsed studio recording. In the latter case the playing of the Orchestra leaves much to be desired and I find the recording by Exton less than average, muffling the second movement under a woolen blanket and building up to distortion level in the louder passages elsewhere. I also have my doubts about van Zweeden’s ability to keep the balance in the orchestra and hence the overall structural management.

Back to zu Guttenberg: all instrumental groups and individual players can be heard and admired in the overall sound picture, thus underlining the ultimate goal of the project: music making as equals, building together the structure of a complex symphony that goes far beyond playing notes at the required speed and intensity.

For me, this disk is a revelation. There may be better versions around, but this one certainly deserves to be heard and savored. Highest marks. This includes the first class recording and SACD mastering for which Cybele AV Studio is responsible. Warmly recommended! 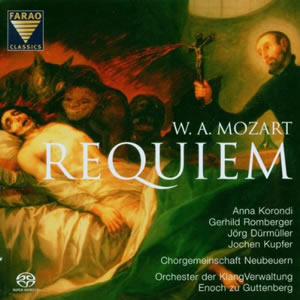 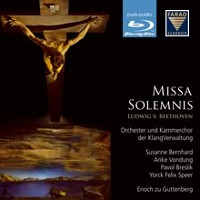