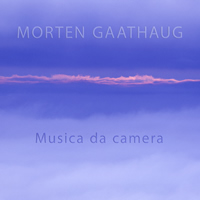 
The composer Morten Gaathaug's music evokes images of all the many facets of Nature and Life. He is inspired by the exuberant magic of birds and has created a fascinating musical language of what normally would be considered natural contradictions: strains of romantics as well as modernism, clear-cut motifs and witty melodies are allowed to co-exist in this intriguing musical landscape. Chamber Music has a special position in Morten Gaathaug's musical universe - join in for a treat of great works for small ensembles.

This is a terrific SACD and something of a welcome surprise.

I played the Piano Quintet to a number of friends and asked them to try to identify the composer. The names of Brahms, Dvorak or one of their contemporaries were among the suggestions made. They were incredulous to discover that, not only did a contemporary composer of whom they had never heard write it, but that the date of composition was 2005!

This music is inventive, melodic, (the tune that opens the 1st movement of the piece will haunt your brain for days), but in no sense whatsoever a pastiche of works by other composers. Morten Gaathaug is best described as an eclectic romantic and his music has an appealing freshness, clarity and originality that, on the basis of this disc, should be much more widely known. The ‘Quintet for Piano and Strings’ is written in a classical four-movement layout with two vigorous Allegros framing a delicious Scherzo and a lovely reflective Adagio. The performance by Ensemble Bjørvika, a quartet made up of players from the orchestra of the Norwegian National Opera, and Tore Dingstad (the dedicatee) is all one could ask for.

The ‘String Quartet No.2’, written in 1986, that is the first item on the disc seems to reflect Morten Gaathaug’s interest in Slovakian folk music stemming from his earlier studies in Batislava. Though stylistically the music may evoke the quartets of Janacek, Bartok, Shostakovich and Prokofiev, it never attempts to emulate them. Throughout its 29’40”one’s interest is held by the originality and wit with which the composer presents his material and Ensemble Bjørvika’s idiomatic performance does it proud.

Between the String Quartet and the Piano Quintet we have six settings of poems by Jens Bjørneboe (1920-1976) that Morten Gaathaug composed in 2002. The poems encompass anger and bitterness in equal measure, and to a large extent inhabit the same bleak world of Schubert’s Winterreise. Gaathaug’s settings of Bjørneboe are most sympathetic to the outpourings of this tragic figure whose disturbed life ended in suicide.
The light baritone of Per Andreas Tønder, accompanied most sensitively by the pianist Ellen Ugelvik, delivers them with conviction.

Thanks to the imaginative 2L production, all the works on this disc are presented to the listener in the best possible light. The 5.1 recording is as good as it gets; incredibly vivid, beautifully balanced and tonally truthful, while, in the multi-channel mix, an almost holographic image of the performers is achieved. The excellent notes also include the texts of the poems in Norwegian and English.

I hope that we shall have more of this composer from 2L and wholeheartedly recommend this superb disc without reservation.