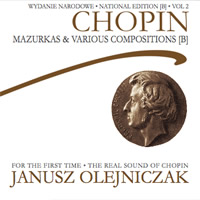 The on-going Polish National Edition of Chopin works aims to produce an authentic edition based wherever possible on manuscript sources and the results of research on their dating. Its Series B collects the works not published by Chopin himself. Many of them were published by Fontana as op. post. 66-74, and they appear as such in many later editions. However, this gives the impression that they were all late works, which is often not the case. The National Edition re-dates these works and given them numbers in chronological order, e.g. WN 1, etc (Wydanie Narodawe = National Edition).

BeArTon have been producing a phonographic edition in parallel. There are now 3 SACDS, and the present disc contains all the 9 unpublished Mazurkas not in the 2-CD set of published mazurkas. The mazurka dance form was the core of Chopin's spiritual response to the land of his birth. He travelled around the country as a young man, taking up instruments and joining in the peasant music-making. On returning to Warsaw he played the resulting mazurkas at aristocratic dance parties, imbuing them with his own unique sense of poetry and drama. While in Vienna and during his long sojourn in France he returned again and again to the mazurka as an expression of his homesickness: they became symbolic of his roots.

The 12 mazurkas in National Edition B recorded here were mostly published after Chopin's death, often given opus numbers in the various editions. For example, WN 60 = Op.67 no 4, WN 64 = Op.67 no.2. They have been re-dated, and this shows that these unpublished mazurkas range from his youth of 15-16 years to his very last composition. They are all worth hearing, some of them as good as the best from the published series. The scholars of the National Edition have worked on a new version of the last unique composition (Mazurka WN 65), which was scrawled in an almost illegible script when Chopin was close to death. It has been published in many editions as Op.68 no.4, often as Chopin's last work, but the new edition shows it to be much longer. Apart from the sentimental associations of the dying man turning his thoughts to his homeland, it is an almost unbearably poignant piece, rich in chromaticism, and superbly played here by Janusz Olejniczak. Indeed his playing of all these mazurkas is wonderful, elegantly displaying their many moods from wistfulness to joy with a fine singing tone, and a rhythmic sense which probably only Polish musicians can apply to these dances.

Following the mazurkas are a surprisingly mixed bag of short pieces, falling into the category of private works which he never intended for concert use and thus were not published. In some senses, these are but chips from the master's workshop, but clearly he was very fond of some of them. A little lullaby in 6/8 time, based on a song of his, was given as an album leaf to no less than six of his friends. Others reveal something of the musical influences which impacted him: the Funeral March WN 9 shows that the young teenager had been playing Beethoven's early sonatas (No. 12 in A flat) and created his own very personal response. I loved the Galop Marquise WN 59, a joke for George Sand while in Nohant, portraying their two dogs, Marquis and Dip. Chopin unbuttoned!

The nocturne in E minor WN 23 is one of Chopin's most beautiful and evocative nocturnes, now thought to be composed during 1828 and 1830 and not a late work. Many pianists will know the Lento con gran espessione in C sharp minor WN 37 as a nocturne, but it is totally unique in have a middle section which recalls themes from all of the movements in the F minor Piano Concerto. Here, Chopin has a different time signature for each hand, 3/4 against 4/4, although he did later simplify this in a version for his less accomplished older sister.

Apart from the essential mazurkas, this disc provides an enjoyable concert which reveals much about Chopin the man. Janusz Olejniczak's playing is affectionate and passionate; he lavishes as much care on one of these smaller pieces as he does with the great ones. The high-resolution PCM recording in a Polish Radio studio is immediate and fully reveals the sonority of the Steinway. There are ample notes (English and Polish) on the National Edition and on the music in the attractive insert.

Chopin lovers should investigate these treasures. One hopes that some of the earlier RBCD volumes might become available on SACD. 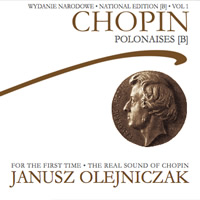