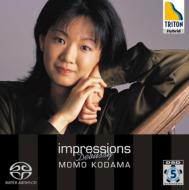 'Debussy Favourites' might be an alternative title here to 'Impressions', although there are several lesser known items. Better, perhaps, since Debussy often complained when his music was labelled impressionistic, as noted in the accompanying booklet!

Given Miss Kodama's recent fine Messiaen disc, it would be surprising if she were not also fond of Debussy. More than just fond, perhaps; she seems easily able to enter his sound-world, finding both his calm spirit and delicacy of touch as well as the flickering passage-work and chordal strength of a restless and often wild composer.

The Children's Corner suite was presented to his daughter Chou-chou in 1908 'with tender apologies for what is about to follow' and was not intended for children to play but is rather a tongue-in-cheek parental reminiscence about his own childhood encounters with music. The 6 pieces begin with a satire on Clementi's endlessly boring exercises and end with the famous Golliwog's Cakewalk, in the middle of which Debussy pauses to maliciously thumb his nose and titter behind his hand at Wagner, with a grotesque quotation from Tristan und Isolde. All beautifully characterised by Kodama. She is graceful and tender in the Arabesques, and suitably neo-classical in the Suite Bergamasque, where there is as magical a Claire de Lune as one could wish. Her 'Estampes' is also colourfully portrayed, particularly in La soirée dans Grenade, which provoked a heated dispute with Ravel, who accused Debussy of plagiarising his Habanera of 1895. One has to admit that there are some very Ravellian moments in Debussy's Spanish essay.

Kodama's final group has a wholly delectable La plus que lente, a slow waltz marked to be played 'with much rubato and decadence', which instructions she follows to the letter. The disc ends appropriately with a virtuosic L'isle joyeux, at the rousing conclusion of which her perfectly timed parting flourish would bring any audience to its feet.

This recording was made in 2002. In stereo it is very good, albeit close; a front-row knees on the piano perspective. For music such as this I think that some more distance would have added enchantment to such an analytic portrayal of the Steinway, but it certainly is a convincing piano image. Turning to the surround channel, the centre speaker carries a barely audible wisp of sound, featuring the piano apparently at the end of a very long tunnel. To hear it at all you have to disconnect your other speakers, be in a quiet room and put your ear directly to the speaker. The rears carry a similarly odd-sounding signal, only slightly more audible. It is impossible to hear any of the surrounds when the front speakers are playing. When moving to Stereo mode from Surround, there is not the slightest sensation of a 3-D sound-field collapsing. Lurking in the booklet notes on Kodama's biography, is a mention that this disc is a reissue of a previous CD, and from this I would deduce that the surround channels have been (badly - or barely) synthesised. My own pre-amp's Dolby PLII Music setting gave a very believable ambient environment. So much for the marketing hype of plastering silver 5-Channel sound over the disc and its packaging. Triton is part of Octavia Records, from whom we have often come to expect a similarly cavalier attitude to true surround sound.

The booklet and track list are in Japanese, English and (appropriately) French, with a good account of each musical item.

A very fine Debussy recital in excellent stereo, but Momo Kodama has been badly served in the surround sound production on this disc.

After my liaison with her Chopin recital, I was nervous about the playing that I might hear on this disc.

Fortunately (in most respects), Geohominid is absolutely correct to say that she plays marvellously throughout - if her interpretation of Golliwog's Cake-walk doesn't bring the tiniest smile to your lips, I'd advise you seek medical help! The rest of the Children's Corner is similarly well played, fully at the service of the music.

In the Deux Arabesques that follow, the more impressionistic side starts to surface and a wonderful haze is conjured up by Kodama. The Exton recording does its' level best to rob the playing of such beauties though, being so close (this is the unfortunately accurate part of Geohominid's review!) Tempo are close on ideal and there is a grace and freshness that is completely disarming in the playing.

The Suite Bergamasque is played as if for the first time - Clair de lune has exquisite tenderness and the Prelude opens with a lovely degree of stature. In between four (relative) miniatures, Kodama presents Estampes. All are lovingly played and this recital in an interpretative respect is light-years away from here Chopin disc.

However - and this will be a big problem for many on this site - the surround sound is nigh on imaginary (in that, I could imagine a better recording all too easily). Like the Chopin disc before, it has a dry and forward recording that makes one think of bad stereo. 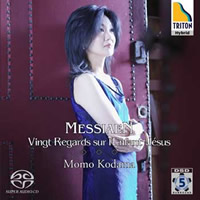 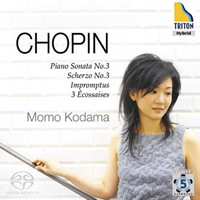