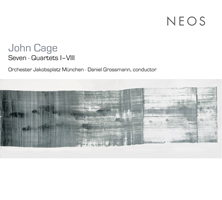 With two very different works, there are two performances of almost equally different standards. Opening with the improvisatory "Seven" for flute, clarinet, percussion, piano, violin, viola and cello we are given a performance that is almost hypnotic with its near-static textures. The work is not tonal but despite this it, unlike much work from lesser composers of the avant-garde, manages to convey real feeling and emotion in this dedicated performance from the young ensemble and conductor.

The Quartets I-VII for 24 instruments should be an interesting and enjoyable first excursion in Cage's non-silent music for many listeners as these works are based on 8 old American chorales. These tonal works have been re-orchestrated so that no more than 4 instruments from the 24 are playing at once. However in their very committed reading, the Orchester Jakobsplatz Munchen under Daniel Grossman try too hard to be expressive and what should be a sung line becomes markedly more fragmented (as is the very danger warned about by Grossman himself in the brief notes).

The recording is good without being exceptional and a point of interest for those with multi-channel set-ups is that for Seven the listener appears to have been placed on the podium whereas in the Quartets a more normal concert-style presentation is adopted.

If only the same response from the musicians had been obtained for Quartets as they demonstrated in Seven...