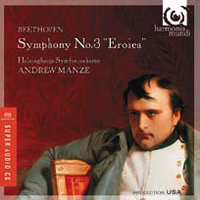 
Emerging from a dark depression, Beethoven chose art rather than death, thus embracing a notion of destiny and heroism which links him to heroes of the past - and of his present. The Eroica Symphony, dedicated initially to Napoleon, and ultimately 'to the memory of a great man', was to prompt contemporary commentators to seek out interpretations in the Iliad. It was this work which first inspired the concept of a 'symphonic poem': here, it is the metaphor that serves the music, and not the contrary.