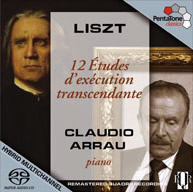 Claudio Arrau is widely known to have been a poet of the keyboard and in this recording, he fully lives up to this reputation.

This tender and most beautiful touch pays great dividends in, for example, 5 (Feux follets), 11 (Harmonies du soir) and 12 (Chasse neige). There are moments when the playing is so meltingly limpid in touch that makes one doubt whether Arrau's piano had hammers at all! However, not every listener will wish for the more tempestuous and turbulent 4 (Mazeppa), 7 (Eroica) and especially 8 (Wilde Jagd) to be so refined. In these movements, it is hard not to yearn for a more physically compelling approach as demonstrated by Berman in his 1959 cycle (Melodia), for the drama does appear to be beautified if not altogether banished from the platform. Partly this is the adoption of tempi that are calculated not to make the pulse quicken but is also a reflection of the remarkable poise that Arrau manages to produce even in the most difficult passage work.

The recording, captured in the Concertgebouw, is wonderful - at no time does the listener hear the hammers of the instrument (it does not sound like a Steinway). There are moments when they capture the truly wonderful effect that Liszt writes in (and Arrau conveys with perfection) of two separate instruments singing to each other - it is so convincing, that one is tempted to check the set-up of ones equipment at first! The 1974 quadrophonic recording has aged extremely well and one would be hard put to guess at the true date of taping, if one were to indulge in a blind listening session.

Recommended for those looking for an alternative approach to the barn-storming so prevalent today amongst younger pianists.