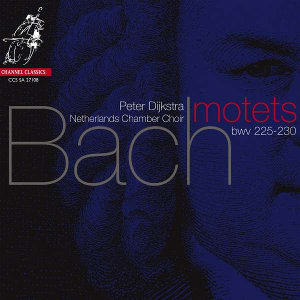 A disc of deep emotion, mainly wrought from grief.

There are six motets on this disc, presented in the following order:
BWV229 - Komm, Jesu, komm
BWV226 - Der Geist hilft unser Schwachhiet auf
BWV230 - Lobet den Herrn, alle Heiden (this is of questioned authenticity - it certainly looks on the printed page as well as sounds, very different from the others in terms of style. My guess is that a Classical era composer wrote this as a pastiche.)
BWV227 - Jesu, meine Freude
BWV228 - Fürchte dich nicht
BWV225 - Singet dem Herrn ein neues Lied

BWV229 is written for two 4-part choruses and Channel Classics reflect the clear separation that Dijkstra gives the Nederlands Kamerkoor. Bach's writing is inspirational, passing phrases between the two groups and gradually making the textures ever more complex and quickly changing before a compound duple time rounds off the main part of the motet. A short aria, in which there is in effect one 4-part chorus, concludes the work. BWV226 is also written for two 4-part choruses and their spatial positioning is the same (chorus 1 - left of centre, chorus 2 - right of centre; both are clearly in front of the listener - this is not a Tacet presentation!) In three parts, the opening triple time mood shifts up a gear into a fugal alla breve before a brief choral (both for one 4-part chorus).

BWV230 is written for just one 4-part chorus; unlike the remaining motets, there is here a separate continuo line - for the other motets, the continuo is derived from the bass part(s). The style of composition is markedly different; more florid runs, almost completely fugal and, most unusually no breaks in the musical line for dramatic effect.

BWV227 is the most grand of the motets and the most varied. Starting with a four-part choral, it is followed by a piece for 5-part chorus (S1, S2, A, T, B); here Dijkstra cleverly alternates between soloists and the full chorus to amplify the musical and emotional effects (particularly the echoes). Gradually becoming more complex it leads into a 5-part sequence in 5 verses; verse 1 is a choral, verse 2 is for the sopranos and alto (allotted to soloists only by Dijkstra), verse 3 is a 5-part song in triple time, verse 4 is a standard SATB chorale followed by a trio for alto, tenor and bass (again allotted to soloists only by Dijkstra) and verse 5 starts with (soloists only as before) the sopranos, alto and tenor before a compound triple time piece for the 5-part chorus. A chorale for SATB concludes the work.

BWV228 is another work for 2 4-part choruses (spacing as before). Arguably the most chromatic piece on the disc, the mood is very uncomfortable (no mere calm reassurance of the divine here), it also features the most explicit call and response sections between the two choruses. In the central section, the work changes into an effective 4-part chorus before splitting once more for the final pages. The opening melody will be familiar from other Bach works (which unfortunately escapes one at present!) the subsequent treatment is not however and is very moving in such dedicated performances.

Closing the disc is most openly joyful and ecstatic work, BWV225, also written for 2 4-part choruses. Again, ideas are shared between the two vocal groups and Dijkstra again has some imaginative touches. For the second major part of the motet, he reallocates soloists as chorus 1, with the remainder as chorus 2. For the final part of the motet, a joyful triple time movement after a passage reminiscent of the opening, the choruses are re-established.

Throughout, Dijkstra has an unerring sense of tempo choice and there are few that will quibble with his phrasing style either, in which he makes the music "speak" the text. The singing is very good throughout, in no way (despite the use of a chorus rather than say one-to-a-part) mimicking the older choral society style. All notes are beautifully rendered and all the phrases are full of life, with appropriate weight and lightness as required. The soloists are also of fine voice and are shared out as much as possible throughout the Nederlands Kamerkoor. Accompanying the singers are Lucia Swarts (cello - from the Netherlands Bach Society) and Siebe Henstra (organ) with great sensitivity. Full notes and texts are provided.

The sound is rich and fully in keeping with the best of Channel Classics' house style. Ideally, a little more clarity could have been obtained from the Waalse Kerk but this is a small quibble in an otherwise faultless issue.