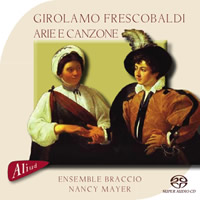 
Girolamo Frescobaldi’s chamber music has been somewhat neglected in favor of his more famous keyboard compositions. This recording presents a selection Frescobaldi’s music for small ensembles as it could have been heard in performance at, for example, an early 17th century salon. Perhaps the best known pieces on this disc are the canzonas for bass instrument and continuo, which are among the earliest published repertoire for solo bass instrument. Like the discant and the discant and bass canzonas, they show a composer exploring the new instrumental conventions of the early 17th century.

The Ferraran composer Girolamo Frescobaldi (1583-1643) had a career which spanned the late Renaissance and the early Baroque. His family were wealthy and well-connected, and Frescobaldi became organist at St Peter's Basilica of Rome on 1608, one of the most prestigious musical positions in Italy. His creative energy was focussed mainly on keyboard music, to which he brought a new style and emotional content which greatly influenced later development of the genre, JS Bach being one who assiduously studied the Italian composer's work.

Despite the dominance of Frescobaldi's keyboard music in the recorded repertoire, he also wrote chamber music, mostly based on the popular "Canzona" format, derived from from the Renaissance multi-part instrumental version of a chanson. This disc contains examples of canzone for a string group which show how versatile and imaginative Frescobaldi's development of the form could be. The instrumental pieces are interspersed by Arias for soprano and harpsichord, sung by Mezzo-soprano Nancy Mayer, whose distinctive radiant voice many listeners will recognise from her discs with Sequentia and the Harp Consort amongst others. Sensitively accompanied by Kris Verhelst, she has a bright, sunny voice just right for these Italianate songs, some of which are dramatic scenas of great emotional import, such as a Crisis of Faith and Maria Magdalen's lament at the Cross.

The instrumental canzone are in the capable hands of Il Braccio, a quartet comprised of period instruments; a soprano violin, two tenor violins and a bass violin. This early in their development, the violin family retain some of the plangent sound of a consort of viols. Whether in one, three or four parts, Frescobaldi writes graceful and nimble dance sequences, interrupted by dramatic recitative pauses and often followed by slow music of deep pathos. Il Braccio's ensemble is faultless, and their enjoyment of the music is well communicated. Frescobaldi was not without a sense of humour. Some of the earliest pieces for solo bass violin, which juxtaposes gambolling in its deep cello-like register with its piping upper range, must have raised much laughter in a contemporary after-dinner recital.

Beautifully presented in a realistic recording, the immediacy of the players is superbly captured, yet the voices and instruments have plenty of air around to develop their tone; multichannel is particularly effective here. Useful booklet notes explain the music's special qualities, but no translations of the Italian aria texts are given. This doesn't matter greatly; as ever with Baroque music, they are about Love, either requited or unrequited, do the music itself and Nancy Mayer as an exponent are very able to indicate what the songs are telling us.

I have no hesitation in giving this very entertaining and instructive recording my full recommendation.