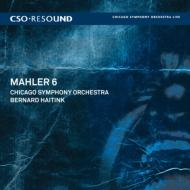 This is an titanic reading of an epic symphony.

Many readings of this extraordinary work clock in at around 80 minutes these days allowing for a single disc issue (for example: Mahler: Symphony No. 6 - Fischer (Ivan) is one, Mahler: Symphony No. 6 - Abbado could have been) whereas Haitink takes over 90 minutes and so brings a weight and power that is not present in those more fleet of foot. It also looks backwards in time rather than the tendancy for Abbado (amongst others) to seek a modernity in the music that some listeners may feel doesn't exist in this score. For those interested, Haitink places the Scherzo second and the first three movements are on disc 1 so those who prefer it Scherzo third can happily program their players to reflect their desires.

The March of the first movement opens more as a trudge rather than a martial clipped walk and it feels like the listener is being dragged reluctantly towards an unpleasant experience. The "Alma/love" theme is played most beautifully and due to the slower tempo of the other material, doesn't need to relax as dramatically as in other accounts. The grotesque dance of the Scherzo is again transformed by the slower tempo into a more fraught vision than some faster accounts afford: the relatively calm passages take on a knowing, mocking feel that belies the score taken at face value.

Haitink's Andante is lovingly dispatched with fine playing from all concerned but it must be said that the moments of danger that prevent this from being a purely relaxing affair are robbed of their urgency at this slower pace. The Finale is, like the preceding movements, taken at a steady pace. Thanks to the superb characterisation of the CSO, the music never drags and if anything the terror induced by the climaxes is greater thanks to them naturally taking longer to conclude. It also affords every detail of Mahler's score to be played with (relative) ease and with authority by - on this performance - one of the world's great orchestras. There is absolutely no consolation in this reading - easily the most depressing (in a positive way) that I have heard for some time.

There are a few quibbles: the violins are clumped together, removing some interesting interplay between sections (Abbado's BPO reading also suffers from this) and the cow bells are very distant indeed - many will prefer them to be more audible. These points aside, the recording is very good, allowing both a rich timbre and great detail to be heard at the same time.

A very strong account that is gripping from start to finish and I would happily have this on the shelf alongside Abbado (or Fischer if Abbado's account is unobtainable).