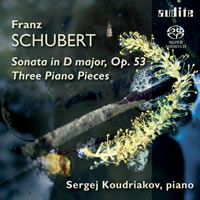 
The Russian pianist Sergej Koudriakov won first prize at the Géza Anda Competition in 2006. This début SACD-recording for audite presents two piano works by Franz Schubert, both of which place great demands on their interpretation. Schubert’s D-major Piano Sonata of 1825 (the so-called “Gastein” Sonata, D 850) and the Three Piano Pieces composed in May 1828, the year of his death (D 946), reveal the composer en route to a new form of piano music poised between the traditional Viennese classical sonata and the romantic character piece. Schubert’s musical and pianistic solutions to this problem are as fascinating as they are mysterious, especially in the case of the unjustly neglected pieces of D 946, whose psychological density and subtle key relationships place them on a par with his final three piano sonatas.

This disc is a balm to the soul like most great Schubert.

With one of his sunniest sonatas (the usual troubled slow movement excepted), Koudriakov provides a playing style that utilises a grand piano with restraint of touch to provide a sound that is both modern yet reminiscent of the days when fortepiano's were but a twinkle in the eye of HIP performers. Dynamics are also well observed and the overall conception makes for very genial listening indeed. Tempi throughout the sonata (with the possible exception of the slow movement) and the 3 pieces are well chosen, neither too fast nor too slow. The marking "Con moto" for the slow movement is treated liberally and whilst there is no lack of momentum (surely the critical issue), this is not given the more urgent treatment that many listeners might feel the music demands.

Following this is a Scherzo that is played with a great deal of life and as in the concluding Rondo, it is all to easy to make the very simplicity of the writing sound trite - here Koudriakov mercifully avoids that peril with ease. The great test of any recording of this type of well recorded repertoire is: does one miss X, Y or Z's efforts? Suffice to say that during playing, no thought of Brendel, Pollini, Perahia, Gilels or the like surfaced in my thoughts in anything other than a positive "I feel no need to turn to them to 'cleanse the soul'" feeling.

The recording is very well done also, with a great sense of atmosphere from the rightly famous Jesus-Christus Kirche in Berlin. Positioned well, one feels as if in a prime seat in a fine chamber hall, rather than in a great church! As piano is a very difficult instrument to record, one must praise Audite for the naturalness of the sound accorded here. 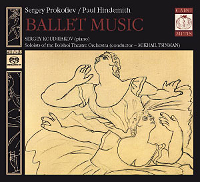