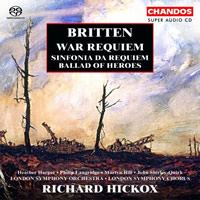 Britten's powerful Pacifist message was originally an occasional piece, written in 1962 for the inauguration of the new Coventry Cathedral, constructed in the shadow of the medieval building destroyed by bombing in the Second World War. It is now celebrated as one of the greatest English choral works, alongside Elgar's Dream of Gerontius and Walton's Belshazzar's Feast.

The late, lamented Richard Hickox was a staunch champion of English choral music, and inevitably he would lead a new recording to put alongside the somewhat ageing but still definitive version by Britten himself. In 1991 he mustered many of the original forces, including the LSO orchestra and chorus, and soprano Heather Harper who sang at the première in place of Galina Vishnevskya who was prevented from leaving Russia to attend the Coventry performance.

The 1991 Chandos RBCD quickly became a classic, and the original material at 44.1/24 was remastered to DSD in 2003, one of the earliest of Chandos' SACD series. Presumably the main reason for this was to take advantage of the 5.0 multichannel mode, which audibly adds extra information compared to the RBCD, particularly in capturing the wonderful spacial effects of the reverberant St Jude's Church venue. The surrounds and centre speakers add well-detailed front to back perspective. This enables the superb production by Brian and Ralph Cousins to follow Britten's basic instructions for the spatial arrangement of his groups of performers. Unlike several other SACD productions (Britten: War Requiem - Masur, Britten: War Requiem - Rilling), all the performers are in front of the listener as Britten wanted, so the piece is truly confrontational as designed.

The Couzens' sound stage is very deep. At the back, "distant" as Britten prescribes, are the choristers of St Paul's Cathedral with a portable organ, and despite their position, the boys produce the most focused tone and clear diction of any Requiem recording I have heard. Next forward layer is the LSO Chorus, singing the Latin of the Requiem Mass, somewhat less focussed (and therefore not always clear in conveying the words). This relative distancing expresses Britten's concept of the Latin texts as other-worldly in contrast to the realistic horrors of war. In front of the chorus is arrayed the main body of the LPO, and Britten's highly detailed score is presented here even more clearly than on Decca's recording for Decca. As an example, you can clearly hear the deep bass piano octaves as part of the black opening chords of the Requiem aeternam. In most other recordings you will probably not be aware that a piano is present, and has a notable part to play in creating atmosphere.

Next forward are the 12 members of a Chamber Orchestra (with a second conductor). In the line are musicians like violinist Hugh Bean, Douglas Cummings (cello), Andrew Marriner (Clarinet) and Ossian Ellis (Harp). The recording rightly presents the chamber group in more detail than usual, raising the importance of its intimate interaction and underlining of the soloist's message in the same aural plane. As the main proponents of Britten's dichotomy of war poet William Owen's blistering accounts of trench fighting and the emollient prayers of the religious, are the three soloists, soprano Heather Harper, tenor Phillip Langridge and baritone John Shirley-Quirk.

Listeners will need to play this disc at quite a high volume to bring the whole ensemble sufficiently forward in the large acoustic, but there is no danger, as the War Requiem is one of the quietest of its genre. At the right volume, the intimacy of the soloist's words and the climaxes such as the tutti 'Sanctus' are each satisfyingly dramatic. As the accompanying Sinfonia da Requiem and Ballad of Heroes are in the same acoustic, you will find that the timpanic fusillades of the former and the pounding bass drum of the latter will be truly shattering.

Heather Harper was recreating her performance in the first performance, singing with profound knowledge of the texts and benefiting from her rehearsals with the composer. Although recorded here just before her retirement, her voice does not greatly show her ageing, and her special phrasing and inflections in this work are now captured. Langridge and Shirley-Quirk are in fine voice and show wisdom and experience in their roles, delivering Owen's bitter poems as profoundly disturbing, yet deeply moving.

Although Hickox's reading is sometimes different to Britten's (and so it should be; Art moves on), this is mostly in internal balancing of choir and orchestra, as well as some different voicing in orchestral chords. Most importantly, he conveys Britten's passionate message about the pity of War in an utterly convincing way. Chandos reinforces that message, which was a lifelong thread in Britten's life, by adding two extra, related, pieces, where others usually leave their two-disc sets with the Requiem alone.

'Ballad of the Heroes', Op. 14, was one of Britten's youthful settings of music for his cause. It features three movements without a break, setting poems by Randall Swingler and W.H. Auden which are droll reflections on the stupidity (as Britten saw it) of the concept of Patriotism in his day. The 'Sinfonia da Requiem', Op. 20 is a purely orchestral rehearsal, as it were, for the later War Requiem. Both are given illuminating and vivid performances.

Hickox's set has achieved the status of a classic for Britten recordings, and the multichannel version adds an extra dimension to it. Essential listening.