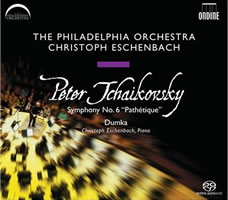 
Building on a legacy... - One might well call The Philadelphia Orchestra playing a Tchaikovsky symphony the perfect marriage. Few ensembles have built such a legacy and strong association with the great Russian master. This recording features the final Symphony No. 6 'Pathétique'. Written in the last year of his life, this most melancholic of Tchaikovsky's symphonies is forever associated with the tragedy of his sudden death in 1893. As an added bonus, the disc includes the seldom-heard piano masterpiece Dumka, performed by Christoph Eschenbach on piano.

With this release, The Philadelphia Orchestra and Christoph Eschenbach have now completed their recordings of the last three Tchaikovsky symphonies for Ondine. Enthusiastic press and success followed on the release of the previous recordings of Tchaikovsky's Fourth (ODE 1104-5) and Fifth (ODE 1076-5) Symphonies, coupled each with one half of The Seasons. Finest SACD recording technology highlights the unique spirit of a live performance of the legendary Orchestra, as well as of its world-renowned and magnificent "Philadelphia Sound".

This last and best instalment in Eschenbach's survey of Tchaikovsky's later symphonies. A live recording in which both conductor and orchestra seem to find the right temperament for a truly memorable performance of this formidable masterpiece.

Many listeners discover this work very early in their acquaintance with classical music, and it leaves a powerful impression. This account presents a view of the work as an organically-planned symphony, rather than a collection of fine movements. It reminded me once more of how concentrated and concise Tchaikovsky's Romantic vision in this piece. Eschenbach's understanding and grip of the Pathétique's architectural and emotional structure is a key element in generating this particular performance.

From the introductory woody-toned bassoon solo, this fine orchestra takes us on a sure path through the first movement. The allegro, never rushed, boils with tension and energy. The strings articulate with commitment and precision, and rest is only found as the transition takes us to the famous second subject, played with angelic string tone and not a trace of swooning sentimentality. A startling whiplash orchestral chord announcing the development section precipitates an urgently passionate turmoil, full of rarely-heard detail, so transparent is the recording of the orchestra's miraculous internal balancing. Searing brass fanfares, thunderous timpani and growling double basses bear the music into its dénouement, where the trombone fanfares are as taut as coiled springs. All energy spent, the second subject's return is drained and sanguine, but builds to a fervent climax, utterly devoid of Hollywood overtones.

The Philadelphia's 5/4 waltz moves along balletically, sung with grace by the warm-toned cellos and decorated lightly with pizzicato violin descants. Its trio smiles wistfully, rather than complaining or carping. The orchestra are fully on their mettle for the march/scherzo, one of Tchaikovsky's most dazzling scorings. Some conductors take this at a great clip to make it into an orchestral concerto, so the audience have no choice but to applaud it, thus ruining the impact of the slow Finale. In keeping with his oversight of the overall symphonic structure, Eschenbach's approach is broader, giving the march a wry humour, with swagger and cheek. The pointed rhythm and vivid phrasing from all members of the orchestra is highly infectious, and the march moves from climax to climax with unerring wit and instrumental polish. The bass drum has a most effective 'slam' and the brass players are suitably uninhibited. Wind solos are superbly poised and caught 'on the wing', inspired by the long takes of live performance.

The middle movements of the symphony are not mere divertissments as often portrayed; they both have their darker moments which Eschenbach clearly points out. Tchaikovsky's finale therefore is the resolution of the despair, surely autobiographical, so nakedly exposed in the First movement. The famous Philadelphia string choir sing their hearts out, in a wonderfully balanced opening threnody, the violas in particular so clear in their countermelodies. Eschenbach's slow pace is stately and elegaic, not funereal and lachrymose as often heard, so this potent psychological drama plays out with nobility and dignity. This finale finds resigned acceptance in the downward-stepping second theme, the tonal lustre of the cellos and basses in the final page being almost overwhelmingly emotive.

After the heated emotions of the symphony, the cool, clear tones of Eschenbach's playing of the Dumka Op. 59 comes like a cleansing sorbet after a rich meal. I wonder how many listeners would guess its composer on first hearing. It works like a Slavic version of one of Liszt's Hungarian Rhapsodies, and gives Eschenbach an opportunity to display his other talents, exposing us to another facet of Tchaikovsky at the same time. A good programming decision.

The high quality of the Philadelphia recordings is by now well-known. They are made by Polyhymnia International with PCM at 88.2 kHz 24bit and are simply exemplary in balance, transparency and multichannel perspective. Capturing every detail of the sound produced by this world-class orchestra, they are fine demonstrations of merging art with technology.

Tchaikovsky lovers will surely want to hear this disc. The outstanding performance is achieved by devoted fidelity to the score by all concerned. And it made me think that Ondine might hopefully record Manfred with this team. What a wonder that could be. 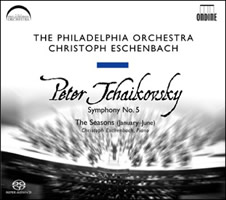 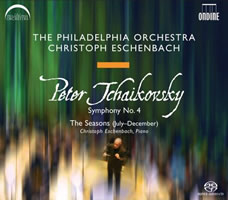