I forgot to add that the regular (single) SHM-SACD releases are still presented in cardboard gatefolds - like the last 3 Karajan/Beethoven albums ...

Universal Japan released the '80s recording Grieg/Peer Gynt/Karajan that I mentioned in my first comment (UCGG-9068, re-issued as UCGG-9505). They also did ...

Since December airmail — including EMS — has been suspended between Japan and Canada, so I've had to put a pause on ordering anything from Tower Records (and I find it's ... 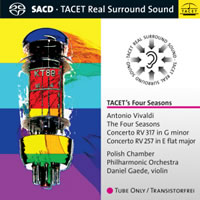 A very traditional, in some senses, reading that will delight fans of modern instruments but frustrate HIP fans.

First off, the good points - the tempo choices are very lively in the outer movements and the slow movements are also well chosen. Also, despite the relatively large forces the articulation is a source of wonder at the dazzling clarity from the Polish Chamber Philharmonic Orchestra. Daniel Gaede also produces a beautifully sweet tone without a hint of difficulty and clearly has a very good rapport with the players and in general there is good musicianship on display - it is easily the best modern instrument account on SACD that I have heard to date. However some of the phrasing is a little too Romantic in feeling to what many listeners will now be accustomed - those looking for a more modern account in the traditional style can be assured that they will fall in love all over again with this score.

A little more problematic is the recording layout in MCH configuration, although the sound in terms of timbre is most pleasing. Where in the past, Tacet have either given us "moving" sound or changed the layout from one piece to the next to bring out the various aspects of the composition as dramatically as possible, here the adopt only one staging that is successful in such regards only some of the time. The layout adopted is:
Solo violin (straight ahead of listener)
1st violins (directly left)
2nd violins (just ahead right)
Viola (behind left)
Cello and harpsichord (behind right)
Double bass (just behind right)
The stereo layer obviously is not balanced in this way and is entirely successful.

A good version for listeners in stereo and if the seating choices appeal, also good for the MCH fraternity.