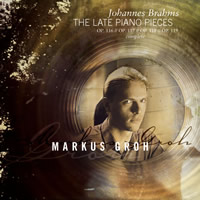 Not being a huge afficianado of solo piano music, for some reason I felt myself drawn today to spin this SACD comprised of Brahm's late thoughts in the medium. What a sublime experience it has been! For the most part, these pieces are filled with melancholy and sadness along with plenty of beautiful melodies. Markus Groh adopts a contemplative approach that perfectly suits the music. He doesn't try to add drama where it's not needed but rather luxuriates in the sonorities of the music, letting it wash over you in harmonic waves. Yes, he has the keyboard chops to handle the few faster pieces with aplomb (like the three capriccio sectons of Op.116) but this music is mostly about mezzo-forte rather than forte and Groh's playing sounds like that of a seasoned, well-aged pianist fully in sync with Brahms' idiom. My favorite piece of this group is the Op.118/2 - what a perfectly sublime melody! Groh plays it beautifully. Throughout, Groh plays a Steinway D-274 that is captured in extraordinarily lifelike sound by engineer Stephan Schellmann. The perspective is that of a small recital hall and the reverberation never obscures the direct piano sound. As close to a perfect piano sound as I've heard on disc.

The only comparative recording I have on hand is Radu Lupu's on a Decca RBCD which contains Op.117-119 but replaces the Op.116 set with the Op.79 set. These were recorded (analog) in Kingsway Hall in 1970 and 1976 and subsequently digitally remastered and issued on CD in 1987. Lupu really takes his time through Op.117/1 making it almost too dreamy. Groh's tempo, which shaves 30 seconds off the Lupu's time of 5:43, invests just a bit more life in the music. The notes of the Lupu don't indicate the piano used but it sure sounds like a Hamburg Steinway with its mellow, bell-like midrange tonality. The Decca recording lacks a bit of top end sparkle and liveliness compared to the very realistic-sounding Groh.

If you are looking for excellent performances of these late Brahms works in fantastic sonics, look no further. This one will Groh on you. Highly recommended! 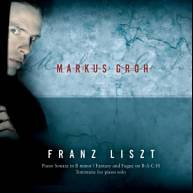