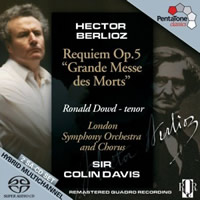 Even before the first notes of this wonderful performance are heard, the palpable acoustic of Westminster Cathedral is miraculously created by the 4.0 recording superbly re-mastered from the original Philips tapes by PentaTone in their RQR series.

As the SACD box indicates, the recording took place in November 1969 in Westminster cathedral at a time when Colin Davis had only recently begun his lifelong devotion to, and championship of, the music of Berlioz. It has been in the catalogue for nearly forty years yet its full sonic potential is only now realised with this issue.
The London Symphony Chorus does not appear to be comprised of huge body of singers, but their diction is so clear that any worries about the lack of the text in the accompanying booklet are rendered quite superfluous. Their full-bodied yet refined singing is joy throughout, from the huge cries of Rex at the opening of the ‘Rex Tremendae’ to the rapt, devotional “a capella” ‘Quaerens me’ they triumphantly meet the demands put upon them.

In the ‘Sanctus’, Davis’s soloist is the fine Ronald Dowd. Though he lacks the authentic Gallic timbre and elegance of say Leopold Simoneau on the 1959 Munch recording and does show a trace of strain on his high B flats, his firm, open and passionate delivery is a decided asset to the performance as a whole.

What in the end, however, makes this recording so special is Colin Davis’s unerring sense of the way this work should be communicated to the listener. Though he has committed it to disc on more than one occasion, his conception has changed remarkably little over the years, and this, his first recording of it, has never been bettered He treats the piece as a visionary masterpiece never as a sonic spectacular, and, as a result the awesome movements, such as the ‘Tuba mirum’, ‘Rex tremendae’ and ‘Lacrymosa’ make an even greater impact than usual.

The Berlioz Grande Messe des Morts has always been an obvious and prime candidate for surround sound and here the technology is put firmly at the service of the music. The most massive climaxes are handled without strain whilst the clarity in the many quiet passages is equally remarkable. This is a most successful and enthralling issue.

A wonderful reissue from Pentatone that deserves the widest circulation.

Compared to Berlioz: Grande Messe des morts - Norrington, the approach of Davis here is very much smoother and rounded; probing the depths rather than revealing the notes with astonishing clarity. Both approaches have their gains and losses and it is mood of the moment that dictates my preference in most aspects.

As far as the performance goes, the LSO play like gods and reaffirm their reputation as one of the finest (modern-style) Berlioz orchestras of the recording era; a great deal of credit has to be given to Davis for the fine training he has provided this orchestra for several decades, showcasing the effects in the relative infancy of their relationship. The choral singing, in particular that of the Wandsworth School Boys' Choir, is good but at the most taxing moments, they cannot quite match the professional singers of Norrington's set; one must also be prepared to accept that the amount of vibrato that singers employed in the 1960's is far greater than what is usual today - even if one rules out the fairly extreme approach of Norrington. Nor perhaps does Ronald Dowd acquit himself as well as Norrington's Toby Spence but these are minor quibbles in such a fine overall conception and performance.

This is a true classic of the recording world and it is our gain that we can finally get to hear it as the Philips engineering team (and presumably Davis et al) wished. The clarity achieved in Westminster Cathedral is remarkable and one is continually surprised by the details that sear through the textures in a seemingly natural way; a bonus is the clarity the larger performing space gives to the lower end of the tonal spectrum. Perhaps from a multi-channel perspective there is one disappointing aspect - the spaced extra brass/wind players. Whilst they are very clearly delineated in the fine sound, it is a shame that Davis or the original engineers were so conservative in their positioning of these groups - a sensational aspect of the Norrington performance is the way these players blaze out from all sides which is quite lost here. There is also a fairly high degree of tape noise in quieter moments but nothing too intrusive and the ears quickly adjust.

So which to buy? In stereo, it's purely down to performance preference - either Davis or Norrington will provide a highly satisfying and exciting rendition but in different ways. For those who enjoy multi-channel, Berlioz: Grande Messe des morts - Norrington cannot be ignored, even if one has strong stylistic preferences for Davis.

"In my view the origin of the [quadraphonic] surround sound is something that should be understood prior to listening to this album. It all began in June 1969 when the Vanguard Record Society introduced "Quadraphonic open reel tape (Q4)". After this the first 4-channel recordings were released for the listeners.
The golden era of the quadraphonic releases took 12 years (1969-1981) although most had stopped appearing by the end of 1976. During this time thousands of quadraphonic recordings were made and not only among the artists of classical music. Elvis Presley (1935-1977) and John Lennon (1940-1980) were both excited on this new technology, for example. Classical performers were thrilled, as well. Herbert von Karajan (1908-1989) made dozens of 4-channel recordings with Berlin Philharmonic Orchestra but for Emi Classics only. Leonard Bernstein (1918-1990) released few albums as well as Claudio Abbado (1933-2014) at the beginning of his Chicago season.
This forgotten technology was discovered again in the early 2000s when Sony and Philips Electronics introduced their magnificent innovation, Super Audio CD (SACD). At that time someone asked: "What we should do for these old surround recordings?" The answer was simple: "We will release them on SACD!" And so it came to pass. The Dutch classical music company PENTATONE released their first RQR (Remastered Quadro Recording) albums in 2003. They were licensed recordings from the catalogue of Philips Classics. During the next 11 years PENTATONE brought out almost 100 albums in this special series. The last album Starring: Christmas - Winchester Cathedral Choir, Martin Neary was released in November 2013.

This Grammy (1971) recording of Berlioz's "Requiem" was released 2008. Recorded in November 1969 at the Westminster Cathedral it was one of the earliest quadraphonic productions of Philips Classics. Few years earlier Sir Colin Davis, the greatest Berlioz conductor of his time, had started to record the complete works of the composer for the mentioned company. The producer was Vittorio Negri who was a real master and pioneer of the recording technology. The sonorous acoustics of the building was quite ideal for the distant brass groups. I think the engineers tried to reach the 360-degree sound field instead of separate four-way listening experience. The lack of the centre channel was slightly disappointment because the voice of Ronald Dowd could have heard from it. Otherwise I can recommended this 2-disc set without reservations. Buy this". 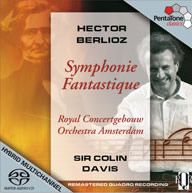