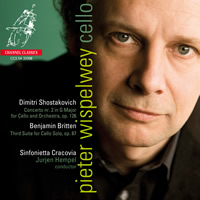 
This CD presents music composed by Benjamin Britten and Dmitri Shostakovich, two striking personalities from recent 20th-century musical history, who were also united by an intimate friendship. Britten had admired the music of Dmitri Shostakovich (1906-1975) since the 1930s, and since that time he had been influenced by it. This was the area of Shostakovich's best known and most often performer symphony, the Fifth, written in 1937. It was composed amidst the worst terror of the Stalinist regime, the paranoia, the culture of spying and betrayal, the pogroms and mass executions. Strangely enough, both the public and the Soviet government considered this symphony a mystery. Shostakovich is working with double meanings in this work: behind a charming smile, a hideous tragedy is taking place. It is this very symphony which Britten quotes at the beginning of this Second suite in d minor (1967), as a gesture of solidarity and sympathy.

A disc of almost unremitting bleakness.

The second cello concerto of Shostakovich is a very dark work; for the most part the cello part sounds as though as if Wispelwey is in mourning with only relative respite in the faster moments where it is as though he is goaded into dancing under duress or with deep irony. Truly depressing playing in the best sense from Wispelwey and the accompaniment is as shocking, in a musical sense, as one could wish.

The Britten suite is not much more upbeat in Wispelwey's hands. Alone in the studio, Wispelwey conveys the isolation felt physically and emotionally. The sense of restraint adds to the sense of intruding on a solitary meditation wrought from grief and anger.

The sound is, of course, very good although in the concerto the violins sound a little distant compared to the rest of the orchestra. The immediacy and almost tactile nature of the woodwind, horns and percussion is astonishing. In the solo suite there is nothing to complain about whatsoever.