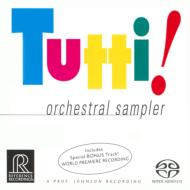 
TUTTI! is Italian for "all together now," as in the sound of a full orchestra playing in perfect ensemble. TUTTI! is also the new full-length sampler of RR's recent classical orchestral releases -- PLUS a special BONUS track available nowhere else! Artists include Eiji Oue and the Minnesota Orchestra, Nicholas McGegan and Philharmonia Baroque Orchestra, Jose Serebrier and the Czech State Philharmonic, Eugene Istomin, Gerard Schwarz and the Seattle Symphony, Jerry Junkin and the Dallas Wind Symphony,and the Turtle Creek Chorale.

‘Tutti!’ is Reference Recordings first release on SACD of a selection of excerpts from some of their many audiophile recordings made over the past fourteen years. The majority of those featured on this sampler date from 1996-7 and it is perhaps a shame that some more recent ones were not included. Unlike their first multi-channel release, Britten's Orchestra - Michael Stern this hybrid SACD consists solely of 2-channel recordings.

As can be seen from the listing above, the chosen excerpts have been carefully compiled to provide a balanced program of mostly classical works that will showcase some of the finest of Prof. Johnson’s recordings as well as give a taste of a selection of the best performances to be found in the Reference Recordings catalogue. The playing time is a generous 71’33”. One excerpt, only to be found on this sampler, is Eiji Oue’s ‘E.C.F.’, an engaging Bernstein/Coplandesque piece, and the third of five symphonic sketches that comprise his suite ‘Presque Isle’.

No doubt like me, many reading this will already have purchased some or all of the complete recordings on CD from which this sampler has been prepared, and will be asking how do the new SACD reincarnations compare with those previously issued CD/ HDCD versions. There is unfortunately no clear and simple answer to that question, as it will depend to a large extent on the quality of one’s hi-fi system and also one’s hearing, so I can only report my own conclusions and that of a few knowledgeable friends. I began by playing the Rimski-Korsakov ‘Dance of the Tumblers’ (Track 1) taken from the original album entitled ‘Dances from the Operas’. I listened first to the regular CD version, then through an HDCD decoder and then finally to the sampler SACD. This comparison process was then repeated with more tracks from the sampler.

It need hardly be said that the sound quality throughout the disc is excellent whether CD, HDCD or SACD. Not surprisingly the SACD immediately showed its superiority over RBCD with smoother, more detailed sound, greater depth and clearer identification of the position of individual instruments, all typical characteristics of the high resolution format. The casual blind testing with friends, referred to above, confirmed this conclusion. When it came to a comparison between HDCD and SACD, the results were more mixed. It often proved rather difficult to identify positively the SACD from the HDCD encoded discs.

My conclusion is that for most people the financial outlay on this sampler would be much better spent on one of the many hundreds of more recent audiophile quality hybrid SACDs currently available, the majority of which also have the added advantage of multi-channel sound. If, however, you decide to try it, you will certainly not be disappointed with the sonics.