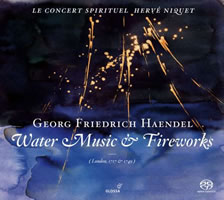 The contents page of Glossa's notes proclaims "First historical version (original instrumentation and tuning)". I would take issue with this on a number of points. Most importantly, this is not the first version with "original instrumentation" for either work. In 1958 Charles Mackerras assembled wind players from London orchestras late at night to record the Fireworks Music with the full complement of wind instruments present at the (ultimately disastrous) 1749 Fireworks display. This version is still available on RBCD, as are later recordings by Robert King and Trevor Pinnock using period instrument complements based on Handel's 1749 autograph.

This autograph clearly shows the effects of protracted negotiations between Handel, King George and the Duke of Montague (who as Master of the Ordinance was in charge of military music). The King hated violins and told Handel they were to have no part in the celebrations; which Handel almost certainly acceded to (although he added doubling string parts for a later indoor performance). Handel wanted fewer brass instruments than the King, and it seems as though nine trumpets, nine horns, twenty-four oboes, twelve bassoons (including a contra-bassoon), and three pairs of kettledrums were settled upon. There are also indications for side-drums, and from another source, information that a pair of ‘double drums’, a particularly large and unique pair of timpani held in the Tower of London, were sequestered for the occasion.

Intensive preparations were made for the Glossa recording (to celebrate the 15th Anniversary of Le Concert Spirituel, Hervé Niquet's period instrument orchestra). This involved cloning 24 copies of an English Stanesby oboe of the period, and similar cloning of horns and trumpets on "a compromise model between the originals and modern versions". This already takes us out of the "historical" realm; Handel would have obtained his players from the Court and theatrical pool of London instrumentalists; their instruments (from various makers) of varying tone quality and playability, thus adding to the ensemble's overall tone colour.

The Niquet orchestra uses a mean temperament (which particular version of the many possible is not mentioned). This means that listeners with good pitch discrimination will experience a certain tpitch piquancy of certain notes in certain keys. Also, it was decided By Niquet and his team that the horn players would not 'cheat' using hand-stopping or boring holes in the instrument so that certain notes not normally available in the natural harmonic series of the instrument could be played in tune. Since this therefore involves some serious mistuning, it is a remarkable decision. Musicians have always been resourceful and highly adaptable as far as overcoming limitations in their instruments is concerned, and there is no hard evidence that such so-called cheating techniques were not used by Baroque horn (or trumpet) players. The large body of strings which Niquet adds (despite the strong likelihood that Handel followed the King's express command not to have his hated "violeens") just doubles wind parts and adds to the general melée.

At first hearing, the Fireworks Music sounds impressive, with the wind batteries and drums resplendent in the large reverberant space of the Arsenal in Metz, France. The Overture begins with big swells in the long-held notes, but there is a gratuitous and lengthy riff for the drums before the ensuing Allegro, which holds up the flow of the music. In the Allegro, the horns are sometimes excruciatingly off-pitch and the pace is hectic, producing a welter of sound; pitch conflicts develop between oboes and brass and there is an absence of the rhythmic lift and stately Baroque splendour found in renditions by King and Pinnock (RBCD), not to mention Perlman or Savall on SACD. The Bourrée is also fast, but with heavy downbeats at the start of phrases, and no change of dynamic or ornamentation in repeats (a normal Baroque practice). 'La Paix' (The Peace) is marked Largo alla Siciliana (very slow in the form of a dance from that country) and is meant to add contrast to the hearty music, but Niquet tears through this piece in 1:40, while Savall's timing is 3:53 and Perlman's 3:05 - both of them lilting and gentle. Awful pitching from the horns at times further destroys the mood of La Paix. In 'La Réjouissance' the jollity sounds forced rather than spontaneous, with the oboes also eventually going out of tune, and the frenetically fast Gigues are un-danceable.

To some degree, the Water Music Suites come off best. "Historical version" means even less here, since there are neither autographs nor first editions available; dance movements from roughly the right period were collected together decades later by publishers and arranged by key into the three familiar suites, but there are variants of some dances and an appendix of more candidates in the latest scholarly edition. We also know very little for certain about the instrumentation of the barge party; on this occasion in the summer of 1717; there is dispute about whether one, two or no harpsichords were present, and no reliable specifications of the number of strings, brass or reed instruments.

Niquet's band performs with somewhat more grace and style in the Suites, but without the varied continuo which Handel normally required. But there is a lack of spatial separation of the violins, so that we are denied the delightful tossing to and fro of phrases, which most other versions offer. Again the unwillingness to vary repeats with ornaments or different dynamics reduces the charm and colouristic effect (which Perlman and Savall give aplenty). I would categorise Niquet's reading as dutiful rather than infectious. At this point I have to mention again the frequent toe-curling off-pitch drift of the horns on certain notes while playing their melodic lines: sample this on Track 2. Incidentally, the track numbers on this disc do not correspond to the movement numbers in the score; several movements are conflated.

Sonically, after an initially impressive few moments, the very reverberant Arsenal and the significant distancing of the wind choirs (well behind the strings), blurs the orchestral focus. The horns, trumpets, oboes and strings are just fuzzy blocks of sound, with no indication of the number of players. Without a dedicated continuo section, the Baroque bass engine is weaker than usual. A final track has a speech followed by a rendition by the full band of the inevitable "Happy Birthday to You", in which it seems as if everybody is gloriously off key in the swimmy acoustic. The disc is transferred at a rather low level, and together with the somewhat distant miking, this diminishes the potential impact of the stated 100 musicians. It is a relief to turn to Telarc's fine sound for Perlman; immediate, rich in tonal character and detail, firm in perspective and so full of impact and Baroque splendour.

I would not suggest that first-time buyers for Fireworks or the Water Music Suites should acquire this disc, and others should sample tracks with the horn players in full cry to see if they can stand the eccentric pitching. For me, listening was marred by waiting for the next time my ears would be offended by karaoke-like sounds, and I have no desire to hear this disc again, as interesting and meticulously its "concept" has been executed. If you want the "real" Fireworks experience, King or Pinnock's RBCD versions are still excellent (and Mackerras' pioneering version is still unmissable), while Perlman or Savall are musically far preferable than Niquet. 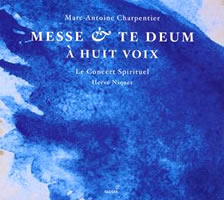