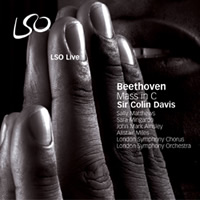 
Commissioned by Prince Nikolaus Esterházy II to celebrate his wife’s name-day in 1807, Beethoven’s early Mass in C contains some of the composer’s most sublime music for voices. Although his original treatment of the text distressed the Prince at its premiere, the Mass is now regarded as one of Beethoven’s most moving works.

Beethoven was a deeply religious man, but wanted nothing to do with the Clergy or the established Church, which he viewed as obscuring his personal relationship with God. He only produced two sacred works; the present Mass in C and, some 16 years later, the great masterpiece of his Missa Solemnis, which has unfortunately cast the earlier Mass aside.

How did Beethoven come to write his first work for the Church? It was initiated by a commission from Prince Nicolaus Esterházy II, who wanted a Mass for the name-day of his wife. As the Prince's Kapellmeister, Haydn had been providing this music, notable the last 6 great masses, but was by then a retired septuagenarian. For several years, the Prince employed fashionable Viennese favourites Fuchs and Hummel to compose the celebratory works, but in 1807 he turned to Beethoven, whose reputation, based on the success of the young tyro's first four symphonies, was in the ascendant.

Beethoven at that time was in the heated process of writing his Fifth Symphony, and may have seen the commission as a welcome (and more restful) diversion. He based his score on examples by his former master Haydn, but whereas Haydn had produced mostly vivid and colourful works, with operatic solos and exuberant choruses, Beethoven followed his own heart and religious inclinations in providing a work which was mostly contemplative and gently lyrical. The Prince was frankly disgusted with Beethoven's Mass in C, telling Beethoven as much and dismissing it in letters to his friends. Beethoven, of course, was deeply affronted, and the work lay unpublished for many years until he finally re-dedicated it to one of his own sympathetic sponsors.

My touchstone performance of the Mass in C is the incandescent RBCD by Gardiner. Compared with Gardiner's Haydn-sized Orchestre Révolutionnaire et Romantique and the medium-sized Monteverdi Choir, Davis of course has the full-strength LSO and its Chorus, who together would just about have filled the Bergkirche at Eisenstadt, where the masses were performed. Such large forces often incur problems of momentum, and this is notable in relative timings, with Gardiner being nearly three minutes faster than Davis in the Gloria and a minute or so faster in the Credo.

Gardiner's forces have tremendous attack and spirit, nuance the gentler music with natural flow. Their fugal endings to the Gloria and Credo are fiery and carry great rhythmic impetus, compared with Davis and his choir, where the Gloria's 'Quoniam' in particular is metrical and rather dull. The choir, however, sing quite well in the more lyrical sections, and the very experienced solo quartet members are very good,reacting to each other's lines impeccably. Tenor John Mark Ainsley's voice is, however, becoming a little grainy and some strain is evident in reaching for Beethoven's high tessitura. Sir Colin of course encourages everyone with his own crooning, although this is not particularly distracting. Overall, this performance, although of a very good standard for a live audience, seems to me to have more than a touch of 'Choral Society' about it, whereas Gardiner's version simply takes fire, has much more light and shade and shows what a marvellous work the Mass in C really is.

Gardiner is also aided by a more transparent recording which allows the winds and brass, better balanced against a smaller string section, to come through more effectively. The performance has an appealing ambience, enabling the climaxes to expand thrillingly. LSO Live are still handicapped by the desiccating Barbican venue, and although rear speakers on the multichannel track add a welcome touch more resonance, there is still little focussed front-to-back perspective.

Most albums of the Mass in C have several useful fillers; Gardiner offers the miraculous Meeresstille und glückliche Fahrt (an impressionistic tone poem for choir and orchestra) and the concert aria 'Ah perfido!', Op.65. LSO Live come up with the strangest of bedfellows for the Mass - the 'Prisoner's Chorus' taken from their previous complete Fidelio. Here the recording is much closer and even drier, with the opening barely audible, diction is often muffled and violins oddly cut through the textures, desperately wanting in bloom.

All in all, a worthy offering at medium price, attractive if you are looking for this marvellous and neglected piece of Beethoven on SACD. My personal preference, however, is Gardiner's revelatory one, in more flattering sound.