I think you'll find the DSD logo on most SACD discs and back covers, and all it's referring to is the delivery format, not the recording format. Many labels unfortunately have ...

This is the first SACD I've ever seen which has not a gold but a silver colour like a Redbook cd. My player recognised it as a real SACD, so I assume it is one. What also ... 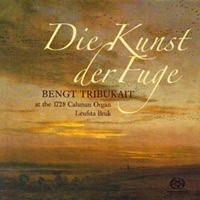 Bach: Die Kunst der Fuge (The Art of the Fugue)

"The Art of Fugue", coupled with its technical subtitles such as "Contrapuntus XIII rectus", seems to discourage attention from music lovers who do not consider themselves connoisseurs. The work (as it has come down to us) is incomplete, subject to endless speculative discussions amongst Bach scholars about what instrument(s) it was meant to be played on, what order its sections should be played in, and what hidden or coded symbolism lies in its supposed intellectual rigour. Enough, it would seem, to deter all but the most determined listener.

There is a commonly held romantic legend (repeated by Bengt Tribukait in his notes) that Bach was bringing this work to conclusion in his last days, but broke off in the final piece, where it is said the composer died. However, watermark studies of the autograph show that composition dated to the early 1740s. Bach was certainly working on its publication in his last year of life, but he was tidying it up and attending to the engraving of plates. The fractured autograph was due to carelessness of his executors, who were also left with the set of so far finished engraver's plates which were not numbered, so the order of the pieces had to be guessed at (it remains controversial to this day). It is assumed that the best order places the fugues in increasing order of complexity. An adjunct to Bach's monumental two books of Preludes and Fugues in every key, the Art of Fugue was Bach's legacy of his own mastery of the form, an answer to similar publications from many of his peers. His self-challenge in The Art was to write fugues of every possible type on a single theme in the same key.

As to which instruments Bach intended the Art to be played on, he left no clues (the autographs are also bereft of tempo, dynamic and expression marks). Modern scholars remain in several opposing camps, but a majority view seems to indicate the most likely target being a clavichord or a three manual harpsichord, as suggested by several (disputed!) features of the scores. The organ is also a natural choice; as Bengt Tribukait tells us, it goes as well on the organ as any organ piece, and he proceeds to back this up with a revelatory performance. He does not tell us if he uses Martin Straeten's transcription of 2001, or one of his own.

Tribukait's playing allows each voice to sound with absolute clarity, even in the most complex textures, yet with captivatingly buoyant and organic rhythms. He gives each Contrapunctus a distinctive characterisation, so The Art of Fugue takes us through a gamut of human emotions. Some fugues are proudly noble, others joyful or gently discursive and conversational. Tragedy and wit may also lie side by side in Bach's Baroque world. The movements with dance rhythms are especially lively (gigue) or deeply contemplative (sarabande). Far from being a dry mental exercise, the Art of Fugue holds some of Bach's most beautiful and life-enhancing music.

Tribukait's co-partner in this wonderful exposition of The Art is the Cahman Organ at Lefusta Bruk, north of Uppsala in Sweden. This is the most valuable historic organ in Sweden; built in1727-28 by master organ-builder Johan Niclas Cahman (1670-1737) and still mostly in its original condition, especially after a third and more sympathetic restoration completed in 2007. The church is a surprisingly small building for such a grand organ, which would have been more likely found in a cathedral. It has two manuals and pedal division, and is powered by four wedge-bellows. A photograph of the organ shows it to have a magnificent white and gold Rococo case with a somewhat asymmetric disposition and several towers - only just fitting under the church's comparatively low ceiling.

The Musika Redivia recording team specialise in capturing the sound of period instruments, and they have done an exemplary job here. The 5.1 track adds subtle ambience to a crystal-clear image of the organ in its moderate acoustic space, which is big enough to add bloom to the sound but without distorting resonances. The many delightful and often unexpectedly lovely tonal colours of Tribukait's always appropriate and harmoniously balanced registrations (documented track-by-track in the booklet) are heard in realistic detail. An intimate connection between organ, player and church is recreated in your music room to magical effect. One can just sit back and revel in the intertwining voices, marvelling at Bach's supreme invention.

Packaging is a beautifully designed Digipak with an attractive cover painting called "Evening - Birds Flying Away" by Alexei Savrasov, from the Odessa Art Museum, Ukraine. The track listing helpfully gives a layman's description of the fugal form for each Contrapunctus and Kanon and even the track time at which the composer brings in his personal BACH motto theme (B is B flat in German, H is B natural). It would almost certainly have been worked into the fugue subject in a final climax of the last piece, but all we have (thanks to his executors) is a heart-stopping sudden silence. The booklet has a history of the organ and a specification list.

Here is a significant addition to the long and glorious line of famous organists playing The Art of Fugue on the organ, now for the first time in glorious high-definition sound.