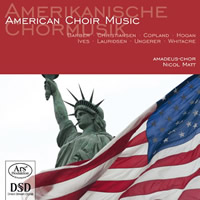 Nicol Matt (b.1970) is one of the most in-demand of the new generation choir masters on the International scene. He has made nearly 100 CD productions for five companies. According to the booklet on the present disc, his discography brought in sales of over eight million cds worldwide.

Amadeus-Chor is one of the organisations he currently conducts, in addition to several others, including the Chamber Choir of Europe. Since his appointment in 2001, Amadeus-Chor have won many honours, including the BBC "Let the People Sing" International Choir Competition. Matt is also a professor of choral and orchestral in several European institutions, besides being a notable soloist himself.

The choir is famed for its broad repertory of works and its distinctive flexibility of tone, ideal for this vivid and informative look into American Choir Music, exploring its characteristic forms, both sacred and secular. With the addition of the remarkable organ piece by Charles Ives (Variations on 'America') to the SA-CD layer (but not the RBCD on this hybrid disc), the disc length of 81:03 is very good value.

First in the programme is Barber's inevitable 'Agnus Dei' arrangement of his Adagio for Strings, Op. 11. You may have heard this piece many times, but the choir's performance here retains all of Barber's cool beauty, blossoming into fervent passion at a flowing tempo. The recording venue of Münster Heilsbronn has a wonderful effect on setting the atmosphere of this and the other programme items. Amadeus-Chor are about 31 strong by my count. They begin very quietly in the Barber, their veiled sound floating out atmospherically into the hallowed church acoustic. Some listeners might think this is a distant recording, but wait for the big climax in the Agnus Dei, when the choral sound vividly opens up and fills the whole acoustic, sounding absolutely magnificent in 5.1 mode as it floods your listening room with voices.

Aaron Copland (1900-1990) is of course one of the 'Fathers' of American music, and here we have his four motets, written as a 'homework' item for his teacher in Paris, Nadia Boulanger. Using biblical text selections, the four pieces are not at all representative of his later mature style, but they already are characteristically tuneful, with hints of American countryside congregations and touches of Spirituals, despite Copeland himself confessing he was afflicted by Mussorgsky! The fourth motet 'Sing ye praises to our King' is as "lively" as Copeland specifies, sung with zest and enthusiasm by the choir, with the odd girlish whoop to add to its prarie sunshine.

Eric Whiteacre (b.1970) is in the new group of American composers, known both for his choral music and writing arrangements for brass ensembles. The first and third pieces are based on poems, and Whiteacre sets different sound-worlds for each of them; the first in 14 parts with solos and sprechstimme. The second, 'Cloudburst' is a commission to portray the energy of our warming atmosphere, and it is accompanied by a proficient youth-Percussion group with bells and a very deep bass drum, and making a consistent sound of dripping water. All these pieces use the very fashionable cluster harmonies, groups of notes as seconds, the close dissonances in choral voices providing their own shimmering beauty. These gorgeous and expressively sung pieces were one of the highlights of this disc for me.

Morten Lauridsen (b 1943) is internationally known as a choral composer and his music is much in demand for amateur choirs. He too judicially uses cluster harmonies, and is a noted melodist. His three Motettes, 'Nocturnes', use poems by Rainer Maria Rilke, Pablo Neruda and James Agee, the first and last being accompanied by a piano (not a concert ground, but what sounds like a practice piano in the church). Again these pieces are sung with great sympathy and understanding of their sentiments.

An unusual contribution is 'The Rose', an arrangement by Uwe Ungerer of an American Ballad written by Amanda McBroom in the late '70s. In 8 parts a cappella, the arrangement by Matt's assistant bridges a simple pop song with the power of a professional choir. Charles Ives (1874-1964), known affectionately as the maverick of American Music, provides two robust hymn-like songs for SATB and organ, including soloists. He was a very skilled organist, and his Variations on 'America' for organ is brilliantly played by Christian Schmidt as the last track. Technically challenging (and often with a tongue very firmly in the cheek), Ives takes what I would call 'God Save The Queen' by Anon, which made its way into most of the Colonies, and constructs variations which would have chilled Bach's bones. Schmidt uses the depths of a bombard-like 32' pedal in a pedal duet which sounds deliciously rude - I'm sure Ives would have loved that.

No traversal of American choir music could omit afro-american Spirituals, such has been their influence on subsequent musical genres. Moses George Hogan (1957-2003) was one of the great arrangers of these songs, producing thrilling, almost orchestral and dynamic results, and Amadeus-chor let their hair down in three of his best songs. Matt's astute direction marries stunning precision of rhythm and ensemble within the choir (you really feel the need to join in!) and one realises why these arrangements are commonly used as test pieces for Choral Competitions. The choir's American English is also impeccable.

Ars Produktion provide full details of the sessions, including all the accompaniment forces, and list all the names of soloists from within the choir. An essay giving information about each composer and most pieces is printed in German and English, as are the texts, and there are extensive biographies.

This whole album is a great success from my point of view, with engineering which makes the most of presenting the choir's flexibility of tone alluded to at the beginning of this review. I keep putting it back in my player, to renew my enjoyment of the contrasts in style and the sheer expressiveness of the music's rendition. Highly recommended.