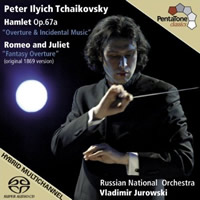 The winning partnership of PentaTone, Vladimir Jurowski and the Russian National Orchestra has yielded a superlative SACD that is as matchless sonically as it almost is in musical rarity value.

The bulk of the disc (43’22”) is devoted to the ‘Hamlet Overture and Incidental Music’ that Tchaikovsky wrote for a production of the play in 1891. It consists of an Overture (a shortened version of the familiar Hamlet - Fantasy Overture of 1888) and a further sixteen pieces, mainly Fanfares, Entr’actes and Mélodrames, but which also include three vocal numbers that surprisingly, and contrary to what is written in the booklet notes, are sung in Russian, not Tchaikovsky’s preferred French. The Ophelia of Tatiana Monogarova is touchingly sung with clear projection and a silvery tone, while Maxim Mikhailov’s firm bass is ideal for the cheerful ‘Gravedigger’s Song’. Though many of the instrumental pieces are very short they all exemplify Tchaikovsky’s exquisite scoring and fastidious craftsmanship, while the longer Entr’actes have a haunting beauty characteristic of the composer’s finest works. Jurowski’s subtly nuanced account of every piece is enthralling and evinces the conductor’s deep identification with, and enthusiasm for, this music.

Tchaikovsky composed his Romeo and Juliet Fantasy Overture, at the instigation of his mentor Balakirev, in 1869, revised it in 1870 and again in 1880. It is this final version that is usually heard in the concert hall and on countless recordings. Jurowski, however, has chosen to record the 1869 version in which Tchaikovsky’s first thoughts are so different that, in many respects, it almost becomes a new work. Of course, familiar elements of the 1880 version such as the “love music” and that depicting the feud between the Montagues and Capulets are still present, but are treated in a strikingly different manner. With Jurowski and the RNO on white-hot form this blistering performance certainly makes a compelling case for the earlier version.

Thanks to Erdo Groot and the Polyhymnia team, the recording quality on this disc is, even by PentaTone’s exacting standards, outstanding. The strings of the RNO soar with a glowing richness while the brass, timpani and percussion make a tremendous impact.

For all lovers of Tchaikovsky’s music this is a disc not to be missed.

This superlative issue could only be bettered in one respect - inclusion of the revised version of the Romeo & Juliet overture so we could enjoy a greater length of listening!

The music to Hamlet (both the overture and incidental music) takes up over two-thirds of the playing time (nearly 45 minutes) and is as complete as one could reasonably wish. The only omission from the published score is that of number 14, a Marche Funebre, although this is nearly identical music as the Entr'acte of number 12 so we're not really missing much except a slightly different second time bar near the end of the first section of the piece.

The playing makes one realise that much of this music is on a par with that of Tchaikovsky's great ballet scores and deserves a far more regular spot in the repertoire. One aspect of the notes that saddens me is the omission of the solo woodwind players (particularly the oboe and bassoon principals) who deserve a special credit for their simply delightful phrasing and sense of musicality. Not that they are alone, for the rest of the orchestra is inspired by Jurowski into loving playing of beautiful music; Tatiana Monogarova and Maxim Mikhailov make the most of their small contributions towards the end of the collection.

The Romeo and Juliet "Fantasy Overture" of 1869 (instead of the usual revised version we hear almost exclusively nowadays) is a weaker work than the more famous re-working but in Jurowski's hands one is almost convinced otherwise. The playing is so precise, delicate and powerful by turns that one is almost agog at the standard of musicianship on display and the ear yearns for the more famous version to follow from the same forces (indeed, on this evidence, as much Tchaikovsky as their schedule allows).

The standards set by Pentatone are once again raised for themselves for this marks a new level of clarity that they have achieved from the DZZ Studio 5 for the RNO. The subtlety and impact of the percussion is tangible and one can almost "see" the seating of the string sections, so clear is the delineation.

Bravo - an essential disc for all lovers of Tchaikovsky's music. 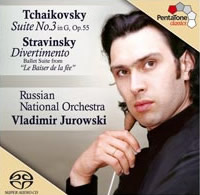 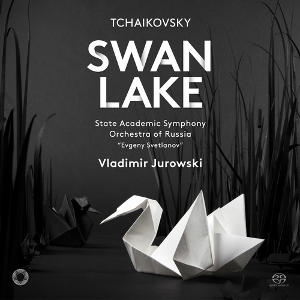 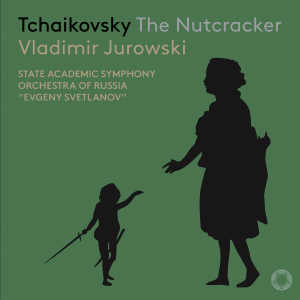