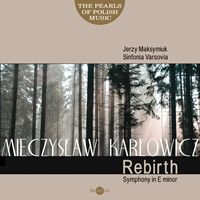 I have never heard of Miaczylaw Karlowicz, and most Poles would apparently have no idea of who he was either. Karlowicz was born in 1876 of an aristocratic family, in what is today Belarus and was then Lithuania. The family moved to Heidelberg, then Prague, then Dresden, finally settling in Warsaw in 1888. Miaczylaw manifested significant musical talent during his childhood, taking up the violin at age 10 and later studying harmony. His first composition was presented to his parents in 1891, a piece for violin and piano. Leaving Warsaw to study music, arts and sciences in Berlin, he finally decided to specialise in composition.

The 'Rebirth Symphony' was completed in 1903 (he was 27) and performed most successfully at a concert in Vienna, together with several other of his works. Regrettably, Karlovicz had poor relations with the members of Warsaw's musical establishment; his frank and uncompromising views on musical matters led to his ultimately being ostracised in his home country. He remained a Late Romantic to the end in his own compositions, although he encouraged many of the modernist tendencies in his contemporaries. Tragically Karlovicz died in 1909, still in his early 20s, victim of an avalanche while hiking in the Tatra Mountains.

His musical and philosophical preoccupations, as those of Tchaikovsky, Richard Strauss and Mahler, were melancholy, sorrow, depression, tragic love, human existence and death - and rebirth. The Rebirth Symphony was given a programme of extraordinary detail, but that matters little; Karlovicz and many of his contempories believed Schopenhauer's theory that music could communicate ideas. However, although music may be the most articulate language of the subconscious, that language is mainly emotional. I therefore listened to this symphony without reading the (very helpful!) programme notes.

Sadly, one usually finds that music which has been abandoned by history is more or less deserving of its fate. The abandoned composition may sound pleasant while you are hearing it, but it leaves not even a transient memory and no compulsion ever to hear it again. However, the Rebirth Symphony held my attention in a vice-like grip from first to last notes. My thoughts never wandered, and immediately it finished, I had to play it again, and then again, and it was even better each time. There is no doubt that this work was conceived in the mind of a Master. It works as an organic whole, its structures, mainly based on the classical sonata form, are clear and seemingly inevitable; the quality of the melodic material is outstanding, the orchestration fully up to the standard of Richard Strauss or Tchaikovsky. Climaxes, of which he is very fond, always pay off as satisfyingly and dramatically as those of Sibelius.

Karlovicz's most remarkable musical attribute is the sheer clarity and force of his musical vision. He knows exactly what he wants to say and how to say it, with none of the note-spinning and doodling of many other composers. There are no spurious notes but, as Mozart once observed, just enough. The listener is willingly taken on a concentrated journey from the first bars. Perhaps one hears certain passages which sound like Tchaikovsky or Strauss - I noted several which recalled Elgar to me - but there is no question of this music being derivative or imitative; the idioms of the Romantic style are fully integrated and Karlowicz's voice is his own. The Elgar references, incidentally, may not be accidental. Although I doubt that Karlovicz had much, if any, direct contact with Elgar's music, conductor Jerzy Maksymiuk was awarded an Elgar Medal for services to the composer's music.

I shall only mention a few of the many highlights in the Rebirth Symphony. After a vigorous and often turbulent first movement, based around a trumpet and horn fanfare (the Rebirth motto), its languid slow movement is given over to a wonderful melody first heard on the solo cello -a song of longing and passion which any cellist would die to play. This is taken up by the violins, soaring up into a tearful climax which resolves into a soulful section of noble resignation. Eventually the melody is handed back to the whole cello section, with feathery stratospheric descants from the violins, an extraordinary and utterly unique texture, as effective as the ripest and sweetest of Strauss' and Mahler's finest leave-takings. The Scherzo is quicksilver, exuberant and impish in best Till Eulenspiegel mode - sparkling orchestral colour and rowdy interludes commented on by chattering woodwind. Its Trio is a slowish and sinuous waltz, utterly beguiling. The Scherzo music returns but is soon halted by the chiming of horns sounding the Rebirth motto, leading us without a break into the Finale. The main theme here is leaping, bounding and crackling with energy, stilled only by the second subject, a most beautiful oboe melody, taken up enthusiastically and developed by the full orchestra. This leads into a sonorous brass chorale (the theme of Rebirth), which later is repeated with the whole brass section in full cry, interspersed with dramatic organ-like chords from the whole band. The coda begins softly, winding up into a huge march-like climax based on the Rebirth motto, and finally ends with a blazing peroration of glowing triumph. This ending is fully as resplendent as the those of Sibelius' Second and Mahler's Fifth Symphonies, and listeners at any concert would have to leap up to applaud, leaving with the feeling of being reborn themselves.

The performance by Jeryzy Maksymiuk and an extended Sinfonia Varsovia is quite simply inspired, clearly fired by this marvellously dramatic and compulsive music. Bearton's HD PCM recording uses the minimum of microphones to tame the ample reverberance of the Polish Radio Concert Hall, giving a thrillingly realistic and detailed surround stage with ample deep bass. Astonishingly, what is usually a Chamber Orchestra most impressively sounds like a very large symphony orchestra.

Before one can pass a judgement on Karlovicz's overall contribution to Western music, we would need to hear more; the String Serenade, Violin Concerto and some of the six tone poems for example. I very much hope that Bearton will give us at least another disc. The present one is rather short measure at just under 50 minutes, but to be honest I simply couldn't bear to listen to anything else after the Rebirth Symphony's majestic conclusion. In the meantime, I shall cherish this disc.

I urge any listener partial to Late Romantic symphonies not to miss this recording of Wieczylaw Karlowicz's Rebirth Symphony. Without a shadow of doubt this is a Master's work, and for me was equivalent to the shock and pleasure of discovering a previously unknown and superb symphony by, say, Elgar or Tchaikovsky. It deserves the widest possible international exposure.

Over the past few years the orchestral music of Mieczyslaw Karlowicz (1876-1909) has seen something of a revival, certainly on disc if not in the concert hall. Chandos, Hyperion and Naxos have recorded all of the few compositions completed by the time of the composer’s untimely death at the age of thirty-three in a skiing accident in the Tatra mountains. Now for the first time on SACD we have a sumptuous new recording of the ‘Rebirth’ Symphony. This recording, the latest in BeArTon’s ‘Pearls of Polish music series, was produced to mark the 90th anniversary of the regaining of Poland’s independence on the 11th November 1918 so the choice of music is most apt.

Karlowicz’s reputation as one of the leading Polish composers of his generation rests almost solely on the six large-scale symphonic poems that he wrote during the final five years of his short life, the last of which, ‘Episode at a Masquerade’, was completed by Grzegorz Filtelberg. The ‘Rebirth’ Symphony pre-dates all these symphonic poems and the influences of Tchaikovsky, Strauss and Wagner, as well as early Scriabin, are apparent throughout the work. Though ostensibly a four-movement symphony, it is closer to a huge symphonic poem of the ‘darkness to light’ or ‘death to life’ variety beloved of late-romantic composers, but Tchaikovsky’s 5th Symphony is most clearly the model here.

Karlowicz provided a very detailed commentary to the work that is heavily influenced by the writings of both Schopenhauer and Nietzsche, and exemplifies both the romantic and pessimistic sides of his personality. It charts the progress of an artist’s soul on a journey from despair that eventually leads to its triumph and fusion with nature.

The veteran conductor Jerzy Maksymiuk and Sinfonia Varsovia give a glorious performance of the symphony aided by the rich wide ranging HD PCM recording taped in the Witold Lutaslawski Concert Studio of Polish Radio. The orchestral image is firm and beautifully balanced while there is just the right amount of ambient sound from the rear surround channels to increase the overall richness of the sound. The yearning melancholy of the first movement underpinned by dark strings and weighty brass gives way to Makymiuk’s deeply felt performance of the slow movement with its abundant outpouring of melody, poignant cello solo and wistful interchanges between clarinet and bassoon. The short, and heavily accented, ‘Vivace’ would not be out of place in a Tchaikovky ballet while the contrasting trio section is again pure Tchaikovsky. The finale (Allegro maestoso) follows the scherzo without a break and at 1’49” Karlowicz introduces a heart-warming, almost Elgarian, theme that will linger long in your memory. The brass chorale that follows begins the build up to the inevitable triumphant and satisfying conclusion.

There are two points that should be mentioned. Maksymiuk’s passionate account of the piece lasts ten minutes longer than that given by Gianandrea Noseda and the BBC Philharmonic on the rival CD version. However, not for one moment did I feel that his performance was, at any point, too slow or lacking dynamism, but those who own the Chandos CD may feel differently. Secondly the playing time of 49’52” for a full price SACD is, to say the least, meagre and it is a shame that that the opportunity was not taken to add one or more of Karlowicz’s other works as a filler to what is a pretty short disc.

Marek Wieronski, the producer of this recording, whose admiration for the work is clear, wrote the informative notes on the composer and his music in the accompanying booklet, and those with a penchant for late-Romantic symphonies recorded in lustrous sound should certainly investigate this release.