Mussorgsky: Pictures at an Exhibition - Ponti 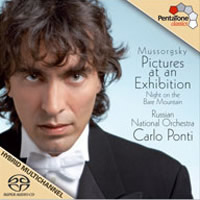 Mussorgsky: Pictures at an Exhibition, A Night on the Bare Mountain

A disappointing release, despite some wonderful playing from the Russian National Orchestra and a very clear recording from Pentatone.

A conductor new to SACD and by the sounds of the music making on offer here, new to the pieces as well. The RNO must have played much of the material on the disc many, many times and unlike when a charismatic and inspiring conductor with a symphonic grasp is placed in front of them they sound bored - as a result so is the listener. There are many felicities (a mark of the professionalism to which the RNO approach the disc) on offer during Ravel's miracle of orchestration - Ponti clearly asks for very neat and tidy playing - which provide for the odd spark of interest at a "new" audible detail here or there. Sadly, the lack of phrasing in some of the longer pictures as The Old Castle or Byldo (The Oxcart) means there appears to be no over-arching framework to the individual caricature or the work as a whole. The lack of grandeur and tension in The Great Gate of Kiev is certainly unusual but not something one wishes to repeat.

Almost more incredibly, the pulse at no time quickens during the Night on the Bare Mountain (in the Rimsky-Korsakov arrangement/orchestration). Quite the best items on the disc are those which are clearly less often performed by the RNO as their interest seems pricked - the Introduction to The Sorochinsky Fair (delightfully tender playing) and the Dance of the Persian Slave Girls from Khovanshchina (the Prelude from the same source is also given a lacklustre reading and there are some slight issues with execution that had a more compelling presence been stood on the rostrum, they would surely have been corrected).

Thanks to the RNO's crystal clear reading, the Pentatone recording (with a narrower dynamic range than one would normally expect from the company - most likely Ponti's doing) allows the listener to dispense with a score; all the details are audibly clear!

Not recommended to anyone except die-hard fans of the RNO (the performance rating is for their contribution only - it may have been more exciting had no-one been present on the podium, or even a toddler!)

Some may quibble about this disc, but overall it is an exciting and unique performance of this warhorse. I find Carlo's approach to be a fresh and new and takes Mussorgsky masterpiece in a new direction. I get a sense of delaying and holding back for the big climaxes at the end. Also, listen for those marvellous RNO horns. With a warm recording and Ponti's control, this makes for a very good addition to the existing versions of Pictures. The Night on The Bare Mountain is also very good.

For me, the special surprise on this disc is the enchanting and gorgeous performance of the Introduction from the Sorochinsky's Fair with pastoral oboes and wonderful orchestral colors. The Prelude and Dance of the Persian Slave Girls do not disappoint either. Colorful, ethereal and simply enjoyable, these make for wondeful fill-ups on this disc.

It's very hard for me to fault this disc on many levels. Sure Ponti is perhaps not the strongest conductor of the Pictures, but I have gotten much pleasure out of this disc, and after the excitement and energy of Pictures and Night, the remaining works are simply enchanting and will take you away to who knows where.

The sound is first rate Pentatone with no harshness at all, full, rich and warm with wonderful depth and color. An excellent disc that deserves more praise and I am glad I added this to my collection. I will be spinning this many times over the years I think.

(This review refers only to the Multichannel portion of this disc.)