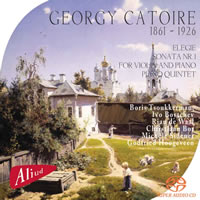 
In 1896 gold was found in the northern Canadian river of Klondike, and from that moment on the word Klondike has stood for undiscovered treasure. Recently one musical treasure after the other is being unearthed. One of these discoveries is the music of the all but forgotten composer Georgy Catoire (Moscow 1861-1926). By the end of the twentieth century Catoire’s music has been gradually gaining worldwide public recognition. Old recordings have been released again and various English, American, German and Dutch musicians have made new ones. There is no doubt that the search for new Klondike treasures will be continued!

Never heard of Georgy Lvovich Catoire (1861-1926)? Neither had I. Of Russian and French parentage, he studied at Moscow University and graduated as a distinguished mathematician. Working for a short time in his father's company, he decided to become a full-time musician, based on his talented piano playing. Unfortunately, he became unduly influenced by the music of Wagner, which later damaged his composing career irreparably, as most of the Russian musical establishment (led by Rimsky-Korsakov) were powerful anti-Wagnerites. Their relative hostility made it extremely difficult for Catoire to get performances or audiences.

Nevertheless, Catoire persevered with his composition and harmony lessons, mostly in Berlin, but he returned many times to Moscow, where he showed some of his compositions to Tchaikovsky, who encouraged him to persevere, remarking to Rimsky (whom Tchaikovsky suggested should be his teacher) that Catoire was "very talented but in need of serious schooling". Rimsky gave him one lesson and passed him off to Lyadov. Some piano works, quartets and a cantata "Rusalka", Op. 5 resulted from Lyadov's tuition. Catoire's family, however, offered no support at all for this musical career, nor did most of his friends. Effectively blocked again from Russian performing resources by his well-known affinity for Wagner, a series of failures caused him to despair. He exiled himself to the countryside and wrote no more music for two years. On his return, he managed to secure a teaching Professorship at the Moscow Conservertoire in 1919.

Very little of Catoire's music was ever recorded; however, noted Russian concert pianist Alexander Goldenweiser set down his piano music and David Oistrakh the violin music, which were later released in the West. A radio recording of the Op.28 Piano Quintet appears to be lost, so the performance on the present disc is a Première Recording. Russian violinist Boris Tsoukkerman, now residing in the Netherlands and a player in the Netherlands Symphony Orchestra, has become an advocate for Catoire, and is largely responsible for the present recording.

The lovely Elegy for cello and piano (Op. 26) which opens the disc immediately reveals Catoire's voice; this is not a personal valediction but a beautifully-wrought song of the spirit, a remembrance of times now passed. It has much of the French refinement and subtlety of Fauré, and rather than using long melodies relies on short sequences which tend to be repeated several times (a Catoire fingerprint which is plain to hear in each of the works on this disc).

Unusual in its choice of key (B minor), the Sonata no 1 for violin and piano Op. 15 is revealingly dedicated to Medtner, a close friend, who also was not a writer of "Big Tunes". Its passionate first movement begins with fire, the piano descending while the violin rises. Broadly in sonata form, its turbulent development finally moves back to the beginning theme, now majestically arrayed, to conclude in the major. Possibly uniquely, its slow movement is a gentle 'Barcarolle', while the finale is scherzo-like, beginning with playful flashes of colour tossed between violin and piano. A long and wistful centre portion returns to a flashy peroration, subsiding to a rich reminiscence of the first movement's dark opening theme, before this again moves finally into the light of the major key. A work of great technical and interpretative challenges for both pianist and violinist; one can certainly see why Oistrakh was keen to record it.

There are relatively few Piano Quintets around in the world of chamber music, and Catoire's Op. 28 proves to be a gem of this genre. It is richly scored, full of melodic warmth and emotive conversation between instruments - here the sequence repetition is greatly enhanced by passing the repeats from instrument to instrument. A deeply romantic first movement has great surges of passion leading to tranquil passages of yearning; the Andante is a smiling intermezzo, with a darker and deeper central section. The Quintet's capricious finale is full of elfin twinkles, interrupted by more robust Puckish fun; its playfulness and rhythmic drive carry the listener forward to a radiant conclusion. A wonderfully affectionate and sensitive performance ensures that the Quintet is the star of this disc.

Catoire clearly put his heart and soul into his compositions, and the musicians on this disc play with totally convincing skill and advocacy. Added to this is Aliud's exemplary recording, perfectly balanced with air around the musicians, wonderful rich tone from the cello and viola, sweet violins and a well-prepared Steinway B (one size step down from the full concert grand, and a great choice for chamber music).

Catoire was no Tchaikovsky, but he was at least as good as some of the Russian "Mighty Handful" and I was very impressed by this fine recording. If you are interested in chamber music from the turn of the C19 - early C20th, then don't hesitate to audition this disc.

Oh my. Sonically, this release is an unmitigated disaster in stereo. The piano quintet was recorded in a church in 2002 and there is no playback volume that yields a natural sonic picture of four string players with piano. The piano sound is distant, muddy and veiled. The violin sound is irritating in the upper registers while the cello is bloated and indistinct. Everything is bathed in a reverberant haze and the soundstage is very narrow. The performance, to the best I can tell through the muddled sound, is decent if not inspiring in any way. The work is quite Franckian with meandering, chromatic melodies and languid tempos. It might be worth another recording with better musicians and a better recording team.

The two works for violin and piano were recorded in a studio in 2007 and they, too, have major sonic issues. Here, the piano sound is a bit more distinct but the violin sound pierces the ears in the upper registers and has an unpleasant nasal quality in the lower registers. You can hear the breath intakes of the violinist indicating a close microphone. There was no playback volume that gave anything like a natural sonic picture of a violin playing with piano. The violinist also has intonation issues. The violin sonata comes from the Debussy-Franck impressionistic axis and seems like a worthwhile composition. It will have to await another recording for a final verdict. Save your money – you can safely pass on this.