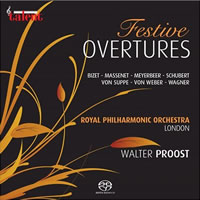 A collection of overtures and preludes which, hand on heart, are not in the A-List for this genre. Time was when these pieces featured regularly in concert programmes as warm-ups and 'lollipops', but now they are rarely aired. Many of them come from the Early Romantic period, and Norrington with his period orchestra has shown how fresh-minted they can be when treated in historical context, with narrow-bore brass and reduced string complements, giving the crucial and characterful woodwind parts their full due. Dausgaard has shown how such works can also be played well by a modern chamber orchestra, carefully balanced both internally and in recording. On this disc, however, Walter Proost presents the Big Band overblown approach, with some predictable results.

Talent provide absolutely no information about the music in their booklet, an irritating norm for this company, particularly when presenting works which mostly disappeared from public perception many decades ago. I shall therefore have to do a little of their work for them, noting that the disc's title, 'Festive Overtures', really only applies to a couple of tracks.

Weber's Jubel Overture (1818) is less well-known than his other opera overtures. Its main allegro recalls Beethoven’s overture to Fidelio, a work which Weber greatly admired - both overtures are even in the same key of E major. At the end of the piece, Weber re-uses his orchestration of the British anthem 'God save the King' from his cantata 'Kampf und Sieg' (Battle and Victory), a work written in 1815 after the Battle of Waterloo. The tune is perhaps better known to Americans as "My country 'tis of thee". Incidentally, one is more likely to hear this and other Meyerbeer overtures from brass band arrangements, rather than in their orchestral form.

Wagner's 'Die Feen' (The Faeries) was his first completed opera, dating from 1834, but never performed. The overture has an independent existence as a rarely-heard concert piece. There are hints of Rienzi and Tannhäuser, but there is little that is memorable, and with Proost's rather lethargic pace it outstays its welcome with many false climaxes and upward-rising circles of diminished sevenths, like Escher's stairways, leading nowhere.

The Prelude to Act 1 of Massenet's Werther (1892) is certainly not festive. The opera is named for a desperate and suicidal young man, who near the start of the opera encounters some children singing Christmas carols in July! At just over 5 minutes, it is a rather sweet, lyrical and mostly very quiet piece, mainly for strings, flute and harp. The RPO violin and flute soloists deserve praise for their solos here.

Giacomo Meyerbeer (1791-1864) is hailed as the father of Grand Opera. His 'Fest-Ouverture im Marschstyl' was the "German" contribution to the musical festivities at the 1862 World Exhibition in London and is in 4 parts: a triumphal march, a religious march, and a dance movement, which finally emerges as an arrangement of Arne's great song "Rule Britannia", presumably pleasing his hosts. Proost is again rather deliberate in the march pacing, and at time the rhythms are quite four-square. This music can ramble unless under a tight leash with strong forward impetus. Here, it sounds only intermittently and superficially impressive.

Another definitely non-festive piece follows, the Prelude to 'Les pêcheurs de perles', Bizet's exotic opera of 1863, a drama about fisher-folk and temple priests in Ceylon. It is a slight piece, lasting a mere 2:50 here: unassuming and atmospheric, mainly for strings.

Suppé's music was once inescapable and was a great favourite of Sir Thomas Beecham, who regularly programmed it with his orchestra, the RPO. 'Fatinitza' (1876) is set in the Crimean War which took place only 20 years earlier. The plot basically concerns the leading character’s efforts to marry the niece of an elderly Russian General, despite her abduction by a Turkish Pasha. At once, Suppé (a Croatian whose working life was spent in Vienna) supplies us with some flavoursome Turkish Music, which Mozart and Beethoven would have easily recognised, and the overture develops much military derring-do and vivid love episodes with great relish. At last the orchestra and conductor seem to come alive with this piece, which is not far behind 'Light Cavalry' and 'Poet and Peasant' in quality. The performance has Viennese lilt and swagger aplenty, with a rousing conclusion.

The final offering is the Overture to Fierrabras, a three-act opera written by Franz Schubert in 1822-3; his attempt to create a grand Romantic opera in German. It concerns the adventures of the Moorish knight Fierrabras, and his eventual conversion to Christianity. The Overture has a dark, dramatic opening with tremolandos on the lowest violin strings, followed by a solemn brass chorale. There is, however, little that is recognisably Schubertian in the subsequent development, and no memorable tunes.

Apart from the Suppé overture, the performances are good, work-a-day ones; this is the sort of thing which the RPO can play in their sleep, but they mostly seem uninspired by Proost. His tempi are nearly all on the steady side when compared with other performances, and I feel that the orchestra really needed to be challenged more.

The recording was set down in Dec 1996, and one wonders why there has been such a long delay before release. The venue was the Watford Colosseum (London), supposed to have one of the finest acoustics for music in the UK. However, the Talent engineers appear to have been defeated in several respects. With MC, the orchestra is set well back in a huge swimming-bath type acoustic, with a very narrow centralised sound stage. There is a general sense of a front-back perspective, but the positioning of the strings and winds is rather hazy. It sounds reasonable up to the volume level of forte, but in loud climaxes the sound is congested with a welter of reflections, the brass in particular sounding 'hot' and uncomfortably edgy. Increasing one's system volume to give more immediate and more focussed sound results in the violins sounding very undernourished and steely above the stave. This is related to some lack of mid-range energy, so that violas, cellos and even woodwind are barely audible in tutti ensembles. The stereo layer, while somewhat less reverberant, suffers from the same problems of thin tone.Turning to the two Membran SACDs of the RPO performing the A-List Opera Preludes in a similar large acoustic, one gets a much better picture of the sumptuous sounds the orchestra makes, and of the richness of its string tone, even though these recordings themselves are not ideal. However, they are much easier to listen to than the Talent recording at higher volume levels, and are more focussed in orchestral positioning. Other recent orchestral discs from Talent have also had motably more successful engineering.

These are not outstanding performances of this neglected and fascinating repertoire, and I regret that Maestro Proost did not cultivate such sensitive flowers of the Early Romantic by reducing the RPO's string section to balance better with the woodwind, and not encourage the brass so much (such encouragement was something which Beecham himself was very wary of!). Judicious internal balancing might then have allowed the engineers to place the microphones in such a way as to provide a more immediate and detailed sound within a wider sound stage, and ameliorate the effects of the potentially cavernous acoustic.

Not really up to my expectations, then, but entertaining, particularly if you like this unusual repertoire, although the selection is seemingly quite arbitrary and hardly lives fully up to the disc's title.