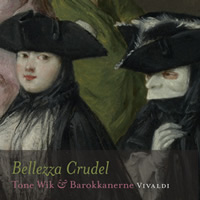 
18th century Venice; where Hollywood meets Las Vegas; where the jet-set of Europe could conceal their identities behind masks and hurl themselves into the fake world of commedia dell'arte. Bellezza Crudel is a small selection of delightful cantatas and concertos. Vivaldi's world is one of heartfelt, musical intensity, confirming the Venetians' adoration of theatrical beauty.

This is a marvellous disc and a real feast of delights for lovers of Vivaldi’s vocal and instrumental music.

The four short Cantatas recorded here are interspersed with two of Vivaldi’s many concertos, one for bassoon (RV484) and the other for flute, played here on the alto recorder (RV441).

The soloist in the Cantatas is the soprano Tone Wik who specialises in music of this period. She possesses an ideal vocal timbre for these pieces. Her pure, bright tone and even production across the whole range is combined with appealing warmth. In addition, her voice has ‘personality’, something that is often missing from other singers in this repertoire, where character is replaced by a sterile ‘whiteness’ that robs the music of vibrancy and life.

Each of the Cantatas is a gem. The texts are full of wonderful 18th century ‘conceits’, while Vivaldi’s often florid music presents huge challenges to even the most gifted performer. Whilst Tone Wik negotiates these challenges with ease, for example in the rapid second aria of Cantata RV697 (Track 4), very occasionally elsewhere some of her diction was slightly vague. The excellent Barokkanerne, a Norwegian ensemble formed in 1989 comprising a group of musicians who have a specialist interest in Baroque music, plays all the accompaniments with unfailing alertness and style.

In the concertos, the woody sounding bassoon of Per Hannisdal gives much pleasure, while Alexandra Opsahl’s virtuoso playing of the recorder in the outer movements of RV441 is quite astonishing.

It seems almost unnecessary to add that 2L’s DXD 5.1 recording is state-of-the-art. The sense of the listener being present with the musicians is almost uncanny, particularly when listening to the surround sound layer. The recording venue of Jar Church provides an intimate yet warm acoustic, one in which every vocal and instrumental line is crystal clear. Presentation is of the usual uniformly high standard, with the Italian texts and translations in English and Norwegian provided, as well as detailed notes on the music and the performers.

An enchanting disc of relatively rare Vivaldi vocal works with a couple of much more familiar concertos.

All the participants on this disc are first rate, from Tone Wik (soprano) and the guest leader of Barokkanerne (Rodolfo Richter of The Palladians) to the ensemble string players and all in between (such as bassoonist Per Hannisdal, alto recordist Alexandra Opsahl who star in their respective concertos and the harpsichordist Christian Kjos). Throughout, all these Baroque specialists phrase and give delight to the listeners that would be hard to match let alone better. Tone Wik possesses the ideal sound for this repertoire, a light refreshing voice that just floats into the room.

All the accompaniments are sensitively played and whilst they never threaten to overwhelm any soloists phrase, nor do they merely plod away in the background - this is a genuine collaboration. Most of the music is sparsely scored, with only the "flute" concerto given more than solo string backing (much of the content of the cantatas is just accompanied by basso continuo).

2L's sound is as crystal clear as one has come to expect although some may find the positioning of the microphones a little too close for comfort - there is no getting away from the fact that we are either on stage or in the very front row (not everyone's first choice!) This apart, there is absolutely nothing to quibble at whatsoever.