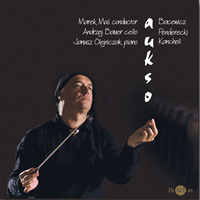 This disc brings together another programme in BeArTon's series 'Chamber Music of the the 20th and 21st Centuries' with a 10th Anniversary celebration of the Chamber Orchestra of the City of Tychy (rather confusingly abbreviated as AUKSO). The programme of three works has Grazyna Bacewicz's Concerto for String Orchestra (1948) and Giya Kancheli's Valse Boston for Piano and Strings (1996) as bookends for Krzysztof Penderecki's Concerto for Cello and Chamber Orchestra (1983-1992). These chamber works are a fine display of the sterling qualities of AUKSO, a group of versatile young musicians who certainly join the ranks of the best in Europe.

The irrepressible Concerto for String Orchestra by Grazyna Bacewicz is a splendid piece, carrying on from the string serenades of Tchaikovsky and Elgar. A recent SACD version by the Trondheim Soloists from 2L provides formidable competition, and it is fascinating to make comparisons. AUKSO, under conductor Marek Mos, are significantly faster then the Soloists in each movement. a full 66 seconds so in the final Vivo (5:06 vs. 4.00). AUKSO's first movement is muscular and energetic from the start, with its main motto theme sounding exultant at the faster pace. The Trondheimers are more relaxed and massive in the beginning, but still rhythmically uplifting. Their Andante slow movement is cool and delicately impressionistic, while AUKSO's flows ahead in a richly harmonic, exotic-sounding vein. Despite their much faster rendering of Vivo in the last movement, AUKSO never seem to be hasty and display their tight ensemble and virtuoso technique splendidly, whereas the Trondheimers take the time to be more playful and less assertive, relaxing into the lyrical interludes from the solo violin.

Both interpretations seem perfectly valid and enjoyable to me and there is little or nothing to choose between the skill and commitment of the respective players. I'm very happy to have both versions. They do differ, however, in their recording techniques. 2L chose to make their DXD/DSD multichannel layer portray the orchestra encircling the listener, while AUKSO are placed in the BeArTon Hi-def PCM recording spread across between the speakers, with the notable ambience of the Music Academy Concert Hall in Katowice issuing from the rears. There is plenty of left-right antiphony from the players, and the overall sound is richly sonorous, with a good solid bass line and sweet violin tone. However, among other fine textural details, one can hear that the violins' soft tremolos at the start of the first movement of the Trondheim version register much more clearly than in the PCM recording.

Krzysztof Penderecki's Concerto for Cello and Chamber Orchestra is unusually chameleon-like. It started off scored as a viola concerto with full symphony orchestra, then Penderecki re-scored it for chamber orchestra with percussion; next the solo was changed to a cello (this present recording apparently represents the first Polish performance of that version), and finally another change was made, this time to clarinet solo. The work was commissioned for the bicentenary of the birth of Simon Bolivar by the Brazillian Government. There are. however, no really distinguishable Latin-American influences, save perhaps in the percussion, which never dominates in the texture, but adds atmospheric and colouristic touches to the string sound. The work is deeply introspective and slow in pace, beginning with a long solo from the cellist, featuring a downward falling, sobbing motif which plays a large part in the concerto's single movement.

Cellist Andrzej Bauer has the measure of this work, displaying richly sustained tone and fine technique, especially in impassioned cadenza-like passages with much tricky double-stopping. The orchestral support is also superb. Ultimately, however, there is no final comfort to be had in this darkly sorrowful work, unresolved despite despairing agitation and a final return to the sobbing motiv. My only caveat is that here the engineers have placed the microphones too close, giving an unnaturally large sonic image of the cello compared to the orchestra, also capturing much of the soloist's breathing and sniffing.

Georgian composer Giya Kancheli's Valse Boston for Piano and Strings follows a period of simplification of his compositional style, which included Georgian folk song, tonal sequences, modes and references to various other musical periods and styles. Although it was named after the Boston Waltz, a somewhat sleezy and indolent variation on the Viennese form (rather surprisingly for prim east-coasters!), there is little of the waltz to discern, except for the time-signature. Like many other Kancheli pieces, it remains more or less in stasis, cycling slowly through episodic variations for most of the time, including a lovely Chopinesque theme with a trill. The composer refers to the gentle motive in thirds which emerges from the pianist after a peremptory throat-clearing loud note, and notes that it always occurs with a truly transparent background, something which pianist Janusz Olejniczak and conductor Marek Mos manage with haunting effect. Apart from this soft, lyrical plane, often marked pppp, there is another much more dynamic, rising to ffff from overwhelming tone cluster chords. There is something of Beethoven's placating the Furies in his fourth piano concerto here. Olejniczak, one of Poland's foremost pianists, plays superbly, and revels in the changes in texture from contemplation to violent confrontation. His soft playing is quite ravishing, as is his response to some of the translucence and luminosity provided by the strings. The piano is forward, but not unduly so, and the engineers have captured the huge dynamic range very well, so that one does not have to reach for the volume control during the piece.

As usual with BeArTon, the production is excellent, with copious notes in Polish and English in a thick booklet. It is a pity, however, that the booklet is emblazoned with "20th and 21th (sic) Centuries", an unfortunate slip!

An immensely enjoyable disk. Apart from the Bacewicz Concerto, there appear to be very few recordings of the other pieces, and it is hard to think that other performances could prove greatly better. I was very impressed indeed with the AUKSO orchestra, and look forward to hearing more from them. Recommended if you would like to explore this rewarding repertoire.

This SACD of three 20th and 21st century compositions features a superbly talented group of 25 young musicians who together comprise AUKSO, the Chamber Orchestra of the City of Tychy in southern Poland.
Marek Mo&#347;, their conductor, established the orchestra in 1998 and this disc is issued to celebrate the 10th anniversary of their formation. Although they have made a number of recordings, this one for BeArTon is the first on SACD.

The ‘Concerto for String Orchestra’ by Grazyna Bacewicz has already received what I considered to be an almost unassailable performance and recording on 2L’s recent SACD entitled ‘Divertimenti’ Divertimenti - TrondheimSolistene. However, the newcomer though different, is equally impressive and I would be hard pressed to make a judgement between them. In 2L’s multi-channel recording, the listener is placed in the centre of the orchestra allowing one to hear a clear, if somewhat artificial, differentiation between the string parts. In this BeArTon version, a conventional set-up is used, with the orchestra situated between the front speakers while the rears provide only ambience. The HD-PCM recording is very fine and the acoustic of the Music Academy Concert Hall in Katowice provides a warm, yet clear, acoustic. The main difference in the performance is that AUKSO play all three movements of the concerto considerably faster than the Trondheim Soloists and with a breathtaking virtuosity that is most exhilarating.

Penderecki’s Concerto for ‘Cello (Viola) and Chamber Orchestra’ commissioned by the Venezuelan government was composed in 1983 and has subsequently been re-scored in six different versions. The one recorded here uses a string orchestra, percussion and celesta. The move by the composer in the late 1970s away from the avant-garde to a more late-romantic style produced works that are more accessible, this concerto being a good example. Though written in one movement the piece falls into five clearly defined sections alternating between slow and fast. The slow sections are full of anguished lyricism while the fast ones feature the percussion section in the orchestra to great effect. Those who enjoy the two Shostakovich Cello Concertos will find this work very much to their taste. The virtuoso cello part holds no terrors for Andzej Bauer who gives an intense performance of the concerto. However, a photograph in the accompanying booklet, presumably taken at the recording session, shows him with a microphone very close to his cello. The unfortunate aural result is that his effortful exhalations are captured with the same sonic realism as his cello playing.

Kancheli’s interestingly titled ‘Valse Boston for Piano and String Orchestra’ (1996) is a fascinating dream-like piece. As is the case with many of Kancheli's scores, this one is spiritually enigmatic in nature and filled with haunting aural images, varied colours and textures, sudden changes of mood and shattering climaxes. It opens with a long passage of limpid beauty that is then briefly interrupted by a more disturbed and rhythmic section. As the piece develops both these elements become more intense and the dynamics widen, but always eventually return to the calm and stillness of the opening. Janusz Olejniczak gives an ultra-sensitive reading of the piano part and the luminous recording does full justice to both his playing and that of AUKSO.

A high recommendation for this imaginatively constructed programme.