The Knight of the Lute - Matthew Wadsworth 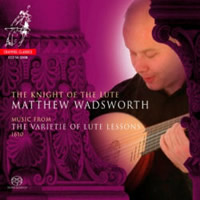 
The seeds of this recording were in fact planted many years ago. As a teenage classical guitarist, I used to spend a lot of time playing other peoples transcriptions of renaissance and baroque music. Little did I know, that many of the pieces I played were actually taken from the Varietie Of Lute Lessons. When I discovered the lute (accidentally) in my first year as an under graduate at the Royal Academy of Music, I found myself returning to some of the same pieces, except this time, in their proper context. Not only did I have to develop a Braille system for notating lute tablature (with the help of Tim Crawford), but I then had to spend hours manually writing the pieces out on a clunky old Braille typewriter. I taught a number of my student friends to read tablature, and we would spend valuable and precious time each week writing out one or two new pieces. I used to spend hours in the bacement of the library, listening to recordings of one of my great idols, Julian Bream - deciding which piece to write out and learn next.

Since then, it has always been a burning ambition of mine to one day recorde the Varietie of Lute Lessons, and some 15 years after my initial forees into this stunning repertoire, it felt right to finally commit the pieces to disk. Although my understanding of the music has matured over the years, I must confess to finding some of these pieces no less demanding to play. Ironically, the very first note in the book is actually printed on the wrong string, and there are a great many mistakes throughout the pages which I have taken the liberty to correct. It is quite surprising that Robert Dowland was not able to publish accurate versions of his Father's own work, and he even forgets to credit his Dad's authorship of two almains, one of them being Sir John Smith's Almain, which opens this recording. In 1610, Robert Dowland (son of the great lutenitst John Dowland) published two important collections of music in London: A Musical Banquet (songs to the lute) and A Varietie of Lute Lessons (a collection of lute solos)...

The lute has always been considered as one of the most beautiful of instruments. Its curvaceous form and exquisite craftsmanship gives seductive pleasure to the eye, while its gentle and highly expressive tone makes balm for the ear. These features brought it to a Golden Age in Late Renaissance Europe, where its connoisseurs were titled and wealthy owners of the great houses. They listened (and danced) in their oak panelled and tapestried withdrawing rooms; intimate entertainment, often with Royal attendances. The gentle-sounding lute was ideal for these circumstances. Lutenists, pampered musical elites in each country, would, however, have to be rich themselves to afford an instrument.

The eponymous 'Knight of the Lute' of the disc's title was probably Laurencini of Rome. He was one of the great European lutenists whose work appears in a collection of lute solos entitled "A Varietie of Lute-lessons" published in 1610 by Robert Dowland. Robert's father, John Dowland (an exact contemporary of Shakespeare) was arguably the greatest lutenist of his time, and there are many of his solos in the collection of 42 pieces, from which Matthew Wadsworth selected 19 for this recital.

Wadsworth employs a 10 course (lute strings are mostly paired) instrument made by Klaus Jacobsen in 1988, and he opted for a 6th comma temperament, a mean tuning arrangement much favoured by the great organ and keyboard builder Silbermann in a somewhat later period. His notes in the booklet relate his discovery of these pieces some 15 years ago, and how he had to make laborious transcriptions of their tablature into a Braille typewriter of his own design. During this process he encountered and corrected many mistakes in Robert Dowland's printing. Robert was a somewhat feckless son.

The lute invites music of a somewhat inward character, reflecting very well the poetry and literature of the age. Even the dance forms, used in many of the solo pieces, often have contemplative sections and almost sound improvised. Improvisation itself was a vital feature of the lutenist's art, for example in playing Divisions, in which repeated sections were enriched with running figurations. The speed and fluency of a lutenist's Divisions were a measure of his virtuosity.

Matthew Wadsworth's playing is as effective here as on his previous disc (Masters of the Lute - Wadsworth). It is informed by playing which shows heart, intellect and spirit, with a fluency and clarity of execution which easily captures the attention, and is sometimes breathtaking. He has a finely-turned way with cadences, and cheeky decorations are tasefully but deliciously applied.

I particularly loved the named dedicatee pieces by John Dowland, in which Dowland surely gives a judicious musical portrait of the person. 'The most sacred Queene Elizabeth, her Galliard' brightly and majestically introduces the Virgin Queen, followed by chasing polyphonic voices, perhaps reflecting her known intellectual prowess and also love of dancing. His Galliard for the King of Denmark implies rich accoutrements and a sense of humour, while the Earl of Derby sounds like a strutting dandy!

Wadsworth's first disc was recorded in a church, and the venue for this one was the National Centre for Early Music in the ancient English town of York, which is also based in a historic church. The microphones are fairly close, and in a neutral acoustic which allows the sound to develop without interference from sundry reflections, thus preserving the intimacy of the music-making.

The sound is so clean and pure that I made an audiophile experiment and played it several times much louder than normal. Although the lute image was large, I was able to hear and enjoy all the subtle sounds of Wadsworth's music-making, rather than just listening to the music itself. The sound is scalable without revealing treble distortion or loss of bass quality. Slight string squeaks, the sound of left hand fingers coming onto and off strings, the right hand moving above and below the rose to change the timbres of the strings (where each course has a characteristic set of overtones), are all revealed in the 5.0 multichannel mode. Oddly, although turning to stereo gave an excellent impression, subtle warmth and depth was clearly missing, perhaps demonstrating the room's acoustic contribution to the lute's sound. You couldn't wish for a better demonstration of how high-resolution reproduction enhances a musician's art.

Matthew Wadsworth and his music lead you through a wide gamut of human emotions and the recording places this fine performance in your listening room with no barriers to enjoyment. What more could you wish? 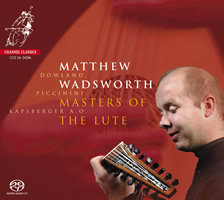