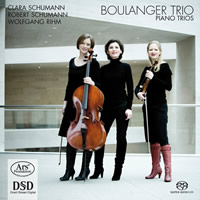 I bought this disk already some years ago and it has become one of my favourites. That is one of the reasons why I believe that the extraordinary musicianship of these three ladies, making up the ‘Boulanger Trio’, however belatedly, deserves to be noted on this site.

On several occasions I have given expression to the fact that there is so much more talent around than the limited number under contract with ‘the major labels’. This certainly applies to these young women, which I had not heard before; though they did win some international contests and where invited to perform Beethoven’s Triple Concerto with the Berlin Philharmonic.

It is no secret that playing in a chamber group is very demanding; there is no way you can hide in the crowd of a large orchestra. “Practice, practice and more practice”, is how someone referred to acquiring the optimal quality of these smaller ensembles. And that is what the Boulanger Trio obviously have been doing and still do. Their interplay is exemplary, with a natural balance and faultless intonation of the two stringed instruments. Listening to them is a real treat. But there is more: they have the rare ability to bring to the surface the deeper meaning of a piece and to act seemingly effortless as ‘chameleons’ when changing from one composition to another.

At first ‘hearing’ it sounds like a pleasant salon piece for the ‘upper classes’, which is what it is generally understood to be. In that connection I refer to a recording of the same piece by The Dartington Trio (1987, Hyperion RBCD), giving an accomplished account, with a velvety romantic tone, but bringing no further intrinsic value; they remain at the surface. In the capable hands of the ‘Boulangers’ Clara’s trio op. 17 becomes a real master piece in its own right. I wonder if her husband would have been able to convey so much in such ‘simple’ language.

This trio may perhaps best be described as a double layered composition. There is an undercurrent of ‘wehmut’ and ‘longing’, shining through in various degrees in each of the movements, without an unsuspecting but attentive listener really knowing why and what for.

As I see it, it is the pressure of responsibilities (female composers were not taken seriously in those days, her task was foremost ‘Hausfrau’, bringing up the children and earn family income through her concerts), a feeling of uneasiness, as well as an insecure future that lie at the heart of this trio, rather than an attempt to please a spoilt upper class audience. Many questions must have been ‘bothering’ Clara Wieck at that particular period in her life, with which she tried to come to grips: Not only was she believed to suffer from a post-natal depression (their fourth child had just been born), but there were also marital problems. Robert went through a renewed mental breakdown and it is not unlikely that Clara was wondering where her marriage with Robert and, indeed, her life would be leading.

In this context a quote from her diary (Litzmann, Clara Schumann ein Künstlerleben, Leipzig 1906-1908): "Women always betray themselves in their compositions, and this is true of me as well as of others”, seems to say it all.

Back to the Boulanger Trio. Each movement begins like everyone would expect it: melodious and romantic. But after the introduction of the theme, something happens; one may call it female intuition. Suddenly a deeper meaning becomes visible (or rather: hearable). In their interpretation Ilona Kindt, Birgit Erz and Karla Haltenwanger are able to unearth these feelings, bringing to the surface the melancholy, expectation and hope, hidden under the subtle melodic lines, and they share them with the listener in a manner that goes right to the hart. It goes in fact far beyond ‘the ideal of conviviality’ and ‘joy in music making’ as the liner notes modestly suggest.

This trio alone makes this disk more than worth your while. It should be listened to without distraction. Only then the full meaning will be able to strike you.

Composed 6 years later, this is a total different cup of tea. This is more what one might call a ‘concert hall’ trio, requiring a much bolder approach. It was quite remarkable how the ‘Boulangers’ were able to adapt their play so quite naturally; changing colours like chameleons. Their subtle play makes place for the bold expression needed for a trio that almost bursts out of its chamber seams.

With its conflicting internal elements and changing moods, Schumann’s op. 110 poses much difficulty for the interpreters (and listener) to shape (and follow) its contours and phrasing. Their playing can in some places be characterized as ‘forcefully urging forward‘. With no male chauvinist intent: these ladies play like men.

For comparison, I took my cherished Beaux Arts Trio off the RBCD shelf. For many still a reference recording. It confirmed my enthusiasm for the Boulangers. In comparison there is nothing for them to be ashamed of. On the contrary. The Beaux Arts play expertly in terms of musicality (although I find the Boulangers technically better), but they lack vigour; and their second movement is slightly over romantic, bringing out the beauty rather than the content. I’m aware that this is all a matter of taste and hence not debatable. But I, for one, do like the approach of the Boulangers; also in so far as it gives due to Schumann’s intent of writing a ‘grand’ trio.

The third and final piece on this disk is Wolfgang Rihm’s Fremde Szene III. I have to admit that I am not an expert in this field and cannot, therefore, comment on this piece, other than to say that I was impressed with the way the Boulanger Trio switched over to yet another style of playing with such an ease as though I was listening to another group. A further point probably worth mentioning is that their tuning is superb. With many a modern tonal or a-tonal composer, some lesser skilled chamber players think they can take an inexperienced listener for a ride. Not so the Boulangers: A tone is a tone and should be in tune. Modern or not. (The only composer that I know of, using quarter tones, is the French composer Bruno Mantovani).

As far as I am concerned, and able to say, the Boulanger Trio make a clear case for Rihm (and me curious for more).

All in all a phantastic Disk, with top class sound. 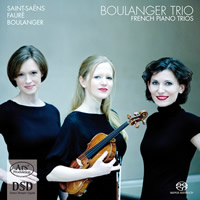