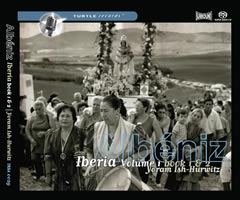 The four books of pieces entitled 'Iberia' by Spanish composer Albéniz were written between 1905 and 1909, at a time when the composer was gravely ill. Moving between Paris and Nice, he was recalling his homeland in a series of jewel-like sound-pictures which are impressionistic yet distil the essence of Spanish music. References include regional dances such as jotas, tarantellas, saetas and stamping flamenco. The pianist has to emulate guitar techniques such as 'rasgueo' (strumming) and 'punteo' (plucking), play within a dynamic range of ppppp to fffff and handle technically vertiginous sections which require enormous physical strength and total control. Iberia is one of the greatest (and most beautiful) elements of piano literature, yet because of its almost inhuman difficulties it is comparatively little known.

Yoram Ish-Hurwitz is a young pianist (b. 1968) of Israeli origin who is based in the Netherlands. He was the first Dutch pianist to graduate from the Juilliard School in New York. Extensive preparations have been made for this recording, which is part of a project to play all four books of Iberia at recitals in an extensive concert tour. In the south of Spain he researched the backgrounds and sources of inspiration of the music, filmed by the talented Dutch film maker Jenneke Boeijink. These films will be shown during each recital, alternating with the music, adding a new dimension to the concert experience. The second SACD with the remaining two books of Iberia will be released later in 2009.

Ish-Hurwitz's performance of Iberia is simply remarkable. He has all the technical equipment required to negotiate the most complex and strenuous passages, and a gift for legato, cantabile outlining of melodies which are inflected with the spirit and dialects of Spanish music. All this skill and poetic expression are under superb control, spontaneous-sounding yet meticulously true to the myriad detailed markings which Albéniz applied to his scores. I played this disc alongside the first two books of Hamelin's two-disc set (RBCD, Hyperion) which is regarded as even finer than the classic version by Alicia de Larrocha, and Ish-Hurwitz yields nothing in spectacle, poetry, elegance and grace to Hamelin. Indeed, at times he is even finer; for example in Fête-dieu à Seville from Book 1, he perfectly sustains the long held notes of a majestic melody beneath a scintillating, massive and rapid chordal accompaniment in the treble; the melody flows undisturbed while the brilliant sun overhead glitters and gleams impressively, as it were. Hamelin, however, has the accompanying treble figurations too loud, and the melody beneath is almost lost. Ish-Hurwitz's phenomenal control not only evokes the vibrant life-essence of the Spanish locations and celebrations conjured by Albéniz, but is fully in service of the delicate impressionistic poetry of these pieces, in which the influence of Debussy is so clear.

This thrilling pianism is matched by a recording which is awesome - an adjective which I rarely use. The Steinway D was in the famous custom studio suite at Mol, Belgium. The buildings are suspended on massive springs which remove all LF noise, producing a noise-free 'black' acoustic for recording. Turtle engineers recorded in DXD and mastered in DSD with Sonodore mics and preamps. Within a supportive ambience (especially in MC), the fidelity of reproduction is breathtaking, with no pedal or action noises. Full attention is given to the enormous dynamic range. Albéniz frequently requires the pedal to be held for bars at a time, and one can hear the Steinway tone developing for several seconds after the keys are pressed. The harmonics are clearly heard, as is their damping when the pedal comes off. Ish-Hurwitz also voices his chords carefully, so that one or more notes register more than others, adding subtle nuances to the music. The powerful rich bass and tonal range of this piano, as recorded, are a perfect marriage for this mercurial yet poetic performance. Hamelin's piano, on one of Hyperion's good RBCD discs, sounds flat and puny in direct comparison.

I suspect it will be some time before another performance will emerge to challenge Hamelin, de Larrocha and now Ish-Hurwitz in 'Iberia' . The sonics of this SACD themselves already outclass rivals by some distance, and to hear this gorgeous, brilliant and life-affirming suite in one's own home is a privilege. I can't wait to hear Books 3 & 4, perhaps with some extra music as on the rival discs; my only quibble is that some people may think that just over 40 mins is very short measure (and the Turtle package is silent about the running time). 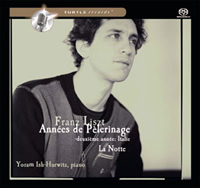 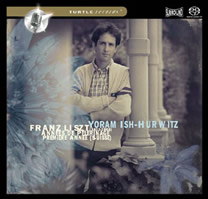 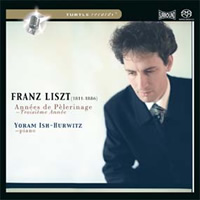 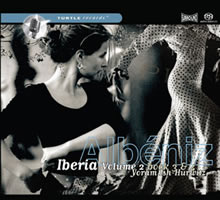